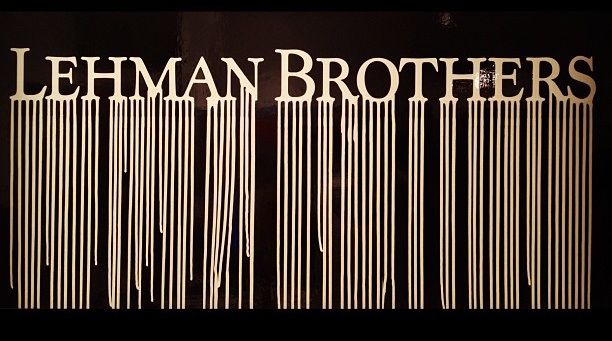 It's a really good play "The Lehman Trilogy". Three actors in 3 Acts cover the company's beginnings in the 1850's to its precipitous fall in 2008. Simon Russell Beale played Henry Lehman, the eldest brother, Emanuel Lehman was played by Ben Miles and Adam Godley was the youngest brother Mayer. It was three and a half hours long. And we stood!

The play has been a sell out and the only way to get a ticket was to turn up early the morning of a production when a few tickets went on sale. My mate Roger turned up on Wednesday queued and was six places back from the front when all the tickets for sale that day had gone. So he went back the next day arriving an hour earlier. The same thing happened: all the seats went before he got to the front of the queue. Except they were offering standing only tickets - for £5. That's how  yesterday evening we turned up at the Lyttelton Theatre and found ourselves standing behind the last row of the circle.

We had a great view - the stage was slap bang in front of us if a few miles away. I was hoping that some younger members of the audience might take pity on us and give up their seats, like people do on the tube. But no such luck. So began Coidan's last stand.

Luckily the play was absorbing. The first act took us from the small shop in Montgomery in the 1850's and the growth of the business into  major cotton "middlemen" after the Civil War and financiers rebuilding Alabama at the end of that war to their move to New York. The Second Act went from the beginning of the 20th Century to the Great Crash of 1929. The Final Act took us through the 2nd World War and Lehman's innovative financing of weapons and computer manufacturing, the end of the Lehman's family involvement in the firm and the subsequent shift from banking into brokership, the sale of the company and its bankruptcy in 2008.

The actors were super, switching roles, switching moods  from triumph to tragedy, pathos to humour and carrying the audience along sharing the trials and tribulations of the family. It is difficult to pick out one performance, but personally I thought Adam Godley was especially effective.

What tied the whole thing together was the staging. All the action took place on a revolving glass  rectangular box, sub- divided into rooms which represented the various offices of the company first in Montgomery and then New York. Onto a large panoramic backdrop were projected scenes of blazing cotton fields, the sky scape of New York, dealers screens and open seas and country. That and the use of light and sound to dramatic effect made for a engrossing experience. The lone pianist at the right hand edge of the stage playing at key points in the play was also extremely effective.

There were two 15 minute breaks which allowed us time to take the weight of our feet. Nevertheless by the end I was aching and then there was the journey home from Waterloo to Walthamstow.

For someone who likes a comfortable seat near the front of the stage this had been a new experience. I'm glad it was such an enjoyable play. Anything less and I'm sure I'd have quit at the first interval.