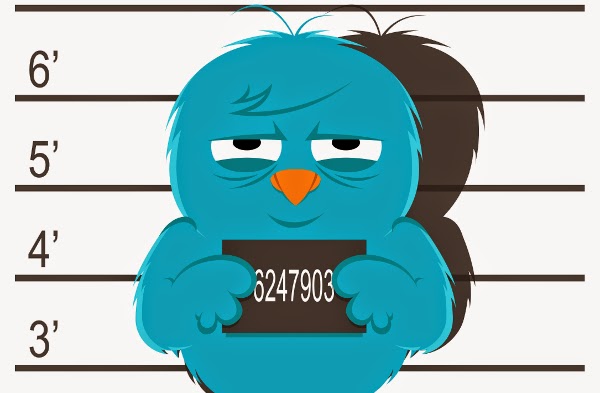 I think I've had it with Twitter. Although to be fair it's not Twitter's fault - it's mine. It's the sort of people I follow. @LadyDangerous - I click to follow: @MrSensible - I'm on him like a rash.... and they all turn out to be Guardian readers or of an irritatingly leftie tendency that's keen on tax increases but feels they're squeezed and not appreciated by society at large.

My Twitter feeds are littered with earnest pleas to stop the war here, there and everywhere. Righteous indignation swells up - FGM, Syria, the Ukraine, UKIP, Tories, drunk bears; it's just too much.

The biggest bete noir of those I follow is BBC's "Question Time". You can guarantee that whilst the programme's on they opining about the panelists and never in a nice way. Get a UKIP representative on the panel and my Twitter feed ignites - I just didn't realise people have so much pent up bile to spit out. And these are people who on other occasions talk sensibly about flock wall paper and washing net curtains.

I have to say that it's the females that I follow who are the worst culprits. Why is that? There next a to string of good old fashioned Anglo - Saxon, smiling out at me, is a picture of the sweetest, prettiest gal you'd ever want to meet. Yet out of those so rosy, cupid lips issues filth! What do they eat for breakfast? razorblades?

If my Twitter feeds are not incendiary, they are absolutely soporific. I am not interested in the slightest in  the humungous pile of curry  and chips (photo helpfully included) @MrMojoMan eat last night. Or the huge dump (photo deleted) he had the following morning as a result. I kid you not!

Even more irritating are the endless updates of the stuttering progress of @LadyJaneGrey's little darling and his attempts to learn the English language #geniusboy -my arse. With a mother like his I'll be surprised if he ever is able to do any more than grunt.

Then there's @ImASmugBastardMe  modestly displaying  #mylatestpiece - a 20ft model of his wife's pudenda constructed out of matchsticks. Oh joy. And as we crank it up for the Election there are all those bloody politicans, pundits and stupid acolytes tweeting as if their lives depended on it. And even if it did I don't give a stuffed dead parrot.

No, it's all too much. My life is ordinary enough without clogging it up with other people's ordinariness. I'm going to kill my account....

Holy humming birds our cat's photo been retweeted 10 times. Awesome! Maybe another one will do even better.

Steve said…
I agree. Totally. What annoys me is that Twitter used to only allow feeds from those you have deliberately chosen to Follow... now I get "sponsored" feeds from people I have not chosen to Follow. My stream is full of so much shit from people I've never heard of it's not worth my time wading through it to find someone I do know. Total overkill.
9 February 2015 at 07:32

MrandMrs said…
My husband has a habit of following some people and they too can get nasty and swear at him.
9 February 2015 at 08:52

Jack the Hat said…
Don't understand a word of this mate. Should the RSPCA be concerned about your cat being retweeeted?
9 February 2015 at 09:36

Anonymous said…
You are closing your account...thank goodness for small mercies.
9 February 2015 at 16:31

Anonymous said…
Call me old fashioned but I dont understand this modern obsession with blogs, tweets, instagrams etc etc. It would be much better if we TALKED to each other - politely!