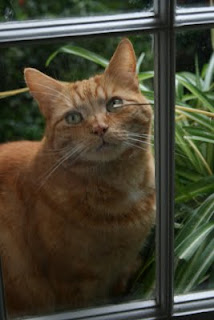 In March a rather shy and nervous tom started visiting us. The numerous plates of succulent food were the attraction. To begin with he would wait at the end of the patio until he felt the coast was clear, and gradually he took to us – first sniffing our hands and quickly running away and then allowing us to stroke him. In no time he’d pushed Tom and Sherry off their outdoor chairs; so he was given his own. Then he would present himself at the window scratching the glass to attract attention. In no time he was marching around the house; sizing up the soft, warm places as snoozing stations. Now he is a permanent fixture (at the moment he’s asleep on our bed).

It didn’t take long for reports to reach us of a young ginger tom terrorizing the local feline population. Reports of cats being pinned up against fences and threatened with all sorts of terrors flooded into our house. Barry christened him Ginja the Ninja. A name to which he answers and warns staff at the vets to don gloves and other suitable protective clothing in preparation for a forthcoming visitation.

We also learnt at firsthand what a feisty cat we’d taken on. Unprovoked bites and feline uppercuts were the order of the day. But he is so beautiful and when he’s in a good mood he’s delightful. Slowly his bad temper and bullying nature has mellowed. He sits on my lap and allows himself to be picked up by Barry. Sherry ignores him but Tom has seen her position as Top Cat threatened and has nothing but spits and snarls for the Ninja. At twice her size he treats her threats with distain.

Onwards and ever upwards

In last year’s letter I mentioned my new enterprise “Couture Beading and Embellishment” which I set up as a partnership with my old friend Diane Vernon.
Despite the recession the bridal market seems to be unaffected and we work regularly for a wedding dress maker based in Islington www.jacquelinebyrne.co.uk who is a delight to work for. We have some tambour beading classes lined up and our new website at www.couturebeading.com is established. After working at home for the past year or so and proving that I have outgrown the available space I have managed to rent a space in a 16th century house in Walthamstow village. It is perfect as it’s at the heart of the artisan community and I will be able to mix with all types of crafts people and top up my creative batteries. Barry has finally cooked the books and sent off the tax returns to the Revenue. He’s confident they won’t discover his “Madoff tricks”. But in the meantime I’m embroidering prison stripes on his jimjams.

Going round in circles

Barry and his partner in crime Gregg have spent much of the year trying to circumnavigate around London. The great challenge was to complete the London Loop – a round journey of 100 odd miles. And quite an endeavor it has turned out to be for our directionally challenged explorers. Almost every trip of 8 -10 miles inevitably resulted in an unscheduled detour – they’d get lost. A planned trip through Epping Forest to Epping found them back at their start point after three hours without a sniff of Epping or its environs. But their most majestic misdirection was a walk from Richmond to Putney.

Having reached the banks of the Thames near Richmond Bridge, Barry and Gregg marched off confidently along the riverbank stopping only to rescue a young lady who was in danger of falling into the river while attempting in turn to rescue her dog. As they trundled along, gleefully greeting fellow strollers, Barry would display his unerring sense of place by pointing out well known landmarks and beauty spots that litter both banks of the nation’s watery highway.

It therefore came as quite a shock to Barry, and then to Gregg, to discover that they had reached Teddington Lock which was considerably upstream from Richmond whereas they should have been considerably downstream from that delightful town. Undaunted, they marched onto Kingston upon Thames and thence to Hampton Court. Except they missed crossing a rather large bridge spanning the river and found themselves heading for the station at Walton on Thames stopping only to ask the way from a young Bengalese who was distributing Indian Restaurant flyers.

At the time of writing our Ordnance Survey novices are attempting to close the loop before Gregg and his lovely wife Chris set off on a 3 month round the world trip on Christmas Day.

Our prayers and huge best wishes go with Chris. But she has been warned!

We plough the field and scatter

Our first year’s stewardship of our allotment plot has been a triumph. We have been blessed with nature’s bounty! From the first stirrings of the beetroot and carrots in early summer to a super abundance of celeriac in the autumn we have faced the challenges that nature has thrown in our faces and prevailed.

We, of course, are completely organic. We share our good fortune with all God’s creatures – including slugs and snails, blackfly, greenfly, squirrels, pigeons & foxes that feast on our hard labour.

It’s all down to preparation and hard work. I prepare and Barry does the hard work – double digging the ground from February onwards and filling trenches with foul smelling (but hugely nutritious) manure and compost.

We all learn from our mistakes don’t we? Green tomato chutney has its place, as does spicy carrot soup, but not in the volumes we were forced to consume this year - but with careful planning next year we will see our table groaning with produce we like to eat.

That’s it really. Another year of challenge and fortitude slips beneath the waters of history and we wave a fond farewell to 2009!

Wishing you all a Merry Christmas and a Happy& Healthy New Year - and of course their Majesties (Tom & Sherry) and HRH GtN send their purrs and greetings.
Email Post