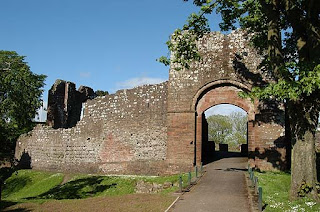 This has been a week of contrasts. On Saturday I went to my aunt’s 50th wedding anniversary party in Egremont, Cumbria. This Friday, I went to the funeral of a friend’s partner. Both were joyous celebrations of life.

At my aunt’s party many of us over 60’s danced energetically to a folk rock band – I was much in demand with my 40 year old impression of Mike Jagger’s foot work. I also jived like 1999. A disappointment was that I was unable to show off my twist “like we did last summer.” But overall, fuelled by an expensive bottle of New Zealand Sauvignon Blanc and fabulously unhealthy pork pies and sausages, I relived the triumphs of my late teens. I was hugely complimented when a twenty year old Estonian blond beauty asked me to take her for a spin on the dance floor.

Egremont is probably the most difficult place to get to in the UK. Situated between the Lakes and the sea you’d think it had everything going for it. The countryside surrounding the town is stunning. Egremont is branded as a market town – but that is a distant memory. As is the industrial activity of Cumbria. It used to have silk mills, mining, fishing and slave trading. No more. The high street, wide, ancient and silent bears witness to the decline of Egremont’s fortunes. The remains of the Norman castle sit amongst decayed buildings and derelict sites. Plastic 2 litre bottles of strong cider litter the streets.

My aunt and her husband moved to Egremont in 1970. They were teachers and still take an active role in the town’s life. They run the local Labour Party paper and are involved in loads of local stuff. Their 4 children have done well. One’s a professor, another has a chemistry PhD and the other two degrees. None live in the area. The nearest, the professor lives in Bolton, the farthest in Germany. Economic forces had worked against Egremont. Jobs have gone, wealth has moved and it struggles to interest the southern, city based money men in its virtues.

The funeral was at the City of London Cemetery in Wanstead. It is a fabulous place – the Victorians knew how to do death – we’ve lost the knack. We go to the grave almost apologetically. Not sure what to expect – except death.

This wasn’t a funeral, really. More a gathering of family and friends. It wasn’t faith based – no hymns or prayers – no visions of life eternal or meeting loved ones on the other side. We entered the chapel to the Finn Brothers – Crowded House – “Everyone is Here”. Then some fabulous tributes from brother, work colleagues, daughter and partner. We learnt and remembered how many people were touched and affected by Nick. My wife was dry eyed until the Kinks “Days”. It was so right. And then as the coffin disappeared behind the curtains “Whole Lotta Love” rung out.

Egremont and the City of London Cemetery are miles apart, but for me they share the same thing. This week I’ve renewed my links with family and friends. I feel so much more enthusiastic about people. This week has been a much needed counter balance to the cynicism of materialism and consumerism. We need to connect with each other. Whether in life or death.
Email Post

The old blond broiler said…
Egremont eh? All those months sitting in the same office and I never knew we both had Cumbrian links!!
Bet you've never been to Maryport.
30 May 2009 at 12:33