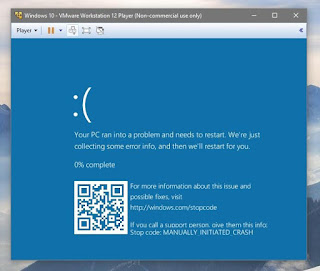 I've probably mentioned in an earlier post that I bought a new desk top PC last September, replacing one I bought a month before which suffered hard drive failure.
My new PC was an HP Gaming machine although I don't game. I wanted something that had plenty of memory and speed. I was delighted with it - until the beginning of the week when my large computer screen went blue on me.
I went through all the recovery steps suggested on screen but nothing worked, the screen remained stubbornly blue. My next step was to contact Microsoft UK and chat on line to one of their experts. We went through a whole load of command line  instructions but the outcome was a message saying that Windows couldn't run. The solution was to download a clean version of Windows 10 and install it on my sick PC.
Luckily I have a new laptop but not a big enough memory stick. Having ordered and collected it from Sainsbury's Argos pick up point and doing some grocery shopping as well, I was set up to go to the Microsoft site, download the software onto the stick and then load it onto my PC. All seemed to go well. It booted up and went through the loading process without a hitch. I confirmed Country and time zone etc and clicked "finish". That was it I thought; fixed. Except there was the blue screen again with the message "Recovery PC/device needs to be repaired"  with an error code: 0xe0000e.
So back again to Microsoft and the helpful online chat people. They couldn't do anymore as it was a hardware problem and nothing to do with the software. Next I got out my invoice from John Lewis and phoned them. Took a while to get connected but explaining the steps I been through and the error message I was told that as it was a hardware matter I should contact the manufacturer HP. I was given their number and told if I had any difficulties with them to get back to John Lewis.
HP couldn't have been more helpful. My call was instantly answered and after repeating all I'd done and the error code, the helpful agent said it sounded like a motherboard problem. He put me on hold for a few minutes and came back with a pick up slot the next day. This was brilliant service - turn around time would be about 8 days.
Shortly thereafter I received confirmation by email and a further email from the courier confirming they'd pick up my PC the next day between 13:30 and 14:30. They arrived at 13:30 and took my PC in a lovely padded case!
I am so impressed by all the people I dealt with. Microsoft who took me through the software checking process, John Lewis who very quickly appreciated my problem and HP for so speedily organising the next day collection.
It was if this infection and its consequences hadn't happened. It bucked me up no end!
Email Post