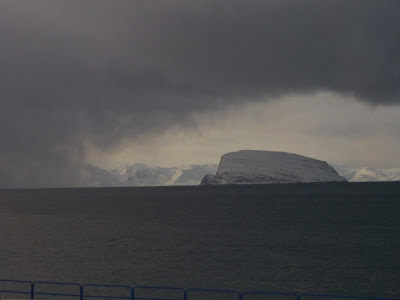 We arrived at Kirkenes early in the morning. It was the end of our northbound journey and for some the last stop.

Deck 4 looked a forlorn sight with people queueing with suitcases and bags ready to disembark and by coach to the local airport to fly home. I had imagined the town to be quite large, industrial especially when we were told the town was 20 minutes from the harbour. It turned out to be a 20 minute walk and the town was small and covered in deep crisp dry snow. The town centre was sign posted and you walked up wide streets past two three/storey homes - the snow is so deep if you lived in a bungalow you'd not be able to look out of your windows for months.

On the right up a narrow lane stood the monument to the Russians who liberated the town in 1944. It's nothing special - a soldier holding his rifle above his head in a triumphant pose. Going past that lane you come across the World War 2 air raid shelter - it wasn't open when I passed. The town was bombed to the ground by the Germans and the shelter was huge - enough to hold the town's 4,000 inhabitants. They also hid in the iron ore mines that had been opened up in the early 1900's. The discovery of the mineral put the town on the map and it rapidly grew from a small village. Information signs were in Russian as well as Norwegian, it being close to the Soviet border and with a mixed community of Finn, Norwegian, Sami and Russian.

The town centre was one street with lights down its length. In the middle was a sculpture of a Russian King Crab. I imagined tourists posing like a 50's horror movie screaming as the monstrous killer crab grabs some poor American blond in its blood smeared claws. The centre was very quiet only one or two shops open and a few cars chugging along.

Near the town centre was another statue of a mother and baby. Both had few clothes on and were bare footed, and laced in snow - I shivered seeing them. I met an Australian who was looking for the war monument - I was able to guide him to the site.  Walking back to the boat I passed rows and rows of new holiday trailers, vans and cars - this was not the poor region it once was.

The rest of the day was uneventful but by 6 pm the wind got up and the sea became increasingly rough. By 7 pm it was difficult to stand and we learnt that because of the weather we were unable to call in on three of the ports. It remained quite rough early in the night but now it is relatively calm and we are heading for Hammerfest - the world's most northerly town. We steaming parallel to snow covered peaks and cliffs with islands dotted about. There's the occasional sea bird and you can't imagine anyone living on these peaks and hills. The sky is of low black clouds touching the tops of the peaks, hints of oranges and pinks in the sky and in the east an egg yolk sunrise.

It's time to dress up and experience the beautiful north.
Email Post