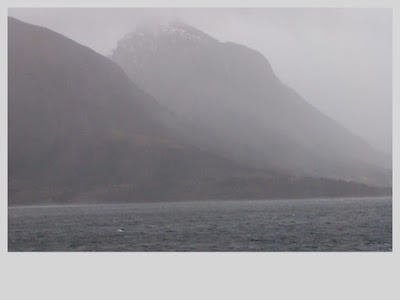 We arrived in Trondheim at 9:30 am. It was raining and the wind was getting up. Rashly I had smoked and peppered salmon for breakfast along with some picked herring. The town centre is a 20 minutes walk from the harbour and I was debating whether to get soaked when a couple I'd got talking to enthused about the challenge of getting really wet traipsing around the town. I was embarrassed into persuading myself that that was a good idea.

I joined the Astronomy bunch and our very pleasant guide Helga or Lotto or Ingrid. We marched off singing "Take Me On" as we passed Norway's only Rock Museum full of Ah, Ah's  bits and bobs.

We stared at the amazing charging gantry for the electric buses in the town and all the charging points and the masses of electric vehicles (ev) at the same time being told that "Norvay" is wonderfully advanced ev wise.

Trondheim is a lovely place and the cradle of Christianity in Norway. In 900 something AD Olaf the Viking on a trip to Ireland caught Christianity and on his return to his homeland decided to convert his subjects - by threatening to put them to death if they refused. I suspect most who signed up secretly maintained their belief in Valhalla and its delights as compared to the rather thin gruel dished up by the Celtic monks.

We ended up at the Nidaros Cathedral - a grim looking church made more so by driving wind and rain. I don't think any of us went in put off by the hefty entrance fee and the thought that it wouldn't be heated. Much more appealing was the well lit coffee and gift shop. Five of us settled down to a decent coffee before deciding to break away from the group and head back at speed to the boat. One of the five was related to homing pigeons -being able to navigate her way around a place having been there only once. Sure enough we were lead by the most direct route back to our boat, going through what to me was the most attractive part of the town. And it started to snow!!

The Norwegian's have a thing about fires and towns since not only burning Alesund to a crisp they had a go at Trondheim - less successfully.

Lunch over around 1 pm, the prospect of being balled at by our resident Astronomy doctor loomed ahead at 2pm. I decided to skip that, instead going on deck to oversee the ship's departure at 13:15 hrs. It was amazing watching the boat leave the harbour and move out into the fiord. The wind! I thought I'd be blown over before I'd taken the boat out!

The weather has deteriorated. With increasing high winds and rough seas I'm not sure we're heading north! It's so dark now I don't see how the skipper can see where he's going.

And I had a phone call from a utilities company: I said I couldn't talk as I was in the middle of a Norwegian fiord - that floored the caller...

Off to dinner shortly. Catch up you all later.