He was well hung 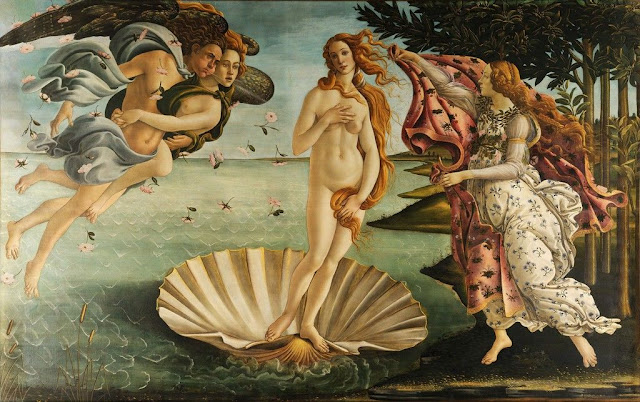 This is either my fixation with dicks or the author's. I will pass over that because it was great theatre. Not the nudie bits - the whole thing. I'm not sure the play was meant to say anything other than don't mess with the powerful and certainly don't fuck their wives.  And if you're going to live life to the full don't be surprised if you end up paying a heavy price.

B is hugely talented, he is the star of Florence. He has the Medici's as patron's, he has Leo Di Vinci as a pupil. What can possibly go wrong?

Well he's shagging Lorenzo's wife while at the same time painting her, in the nude, for what is to be his masterpiece "The Birth of Venus". He's taking some time to complete this work for Lorenza, not because of the numerous sitting required but because he's screwing his model the wife of Lorenzo.

Now Lorenzo is really really fond of B. B's talented, he's lively and funny - what's not to like. They are really good buddies. L is getting impatient - he wants to see the painting featuring his wife and he won't be put off any longer. The trouble is the painting is frankly pornographic - Di Vinci and B spend some time talking about and painting Mrs Medici's fanny and tits - clearly B's extra mural activities have informed his paint strokes. L the M says he's wants to see the painting the next day. B and Leo spend the night turning the painting into the one we know, and love, with hair and hands placed strategically.

No problem you'd have thought. The two geniuses work all night and when Lorenzo and his wife arrive the picture is displayed. Lorenzo is over the moon: it is a triumph. He asks his wife to lie down on the floor in the pose of her in the picture. It's how she lies in bed after sex - except Lorenzo can't recall when last they did it. He hits Botticelli, he drags him across the floor and with a rather long knife threatens to castrate him. He knows what B and his wife have been up to: he also knows that B loves the rather delicious Leo. A deal is struck: You keep your balls if I have Leo and of course B acquiesces.

Next we have much self loathing - oh I forgot to mention in the meantime a rather unsavoury monk has been inciting the good citizens of Florence and faggots are the focus of their hatred. B and his friends are in moral danger and in one scene we learn that some of his gay friends have been burnt at the stake.

Anyway, B gets rather upset, trashes his studio and turns his masterpiece into a Jackson Pollock. He renounces art and his sinful life and burns all his painting - a rather terrifying scene when the whole of the stage was a flame. I looked out for fire attendants but could see none.

The play ends with Leo being released and he and B reconciled, sharing a peanut butter sandwich!

What with mobile phones, disco and Seventies gay camp in late 15th century Florence the play was quite a mash up. It worked.