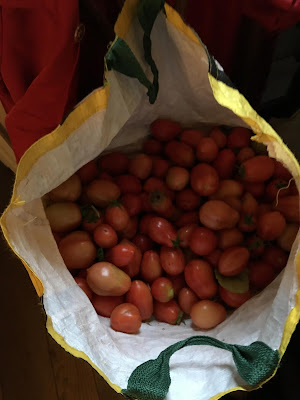 This year I have over dosed on the toms. It's easily done if, like me, you don't trust nature's vegetable powers.

I bought loads of tomato seed packets - all sorts and I wanted to ensure that some at least bore fruit. You see I don't learn from experience.

In 2010 friends of ours went around the World - Mexico, Peru, Chile, The Easter Islands, New Zealand and Japan. You may recall that in 2010 the Pacific "Ring of Fire" ignited. Every place they went to erupted. That's by the by. The thing is they asked me to look after their allotment plot. In reality, since it was winter, that meant making sure stuff in the greenhouse was OK...and could I sow some tomato seeds. I did: whole packets.

Which meant when they returned the greenhouse was choked with tomato plants. Success you would have thought but since I had sown three years' supply of exotic, rare and expensive specimen seeds in one afternoon, I wasn't "gardener of the year."

The trouble is I still don't believe the odds are in favour of my tomato seeds. So I sow billions of them. I am surprised when billions pop up and say "Look at me" and "Pot me on". Which I do. This year I had a veritable conveyor belt of seedlings, which grew into plants which I potted on and planted out. I ended covering most of my allotment plot with small tomato plants.

They looked so sweet and I watered and weeded them until I couldn't get a finger let alone a hoe between them. They grew up my apple tree and the sweet corn provided perfect purchase for the sweet baby toms. Initially in early August  I'd go down and pick a dozen ripe toms, but as late August ratchet up the heat and sunshine my tomatoes reddened in their millions.

So far I have made a least 100 litres of tom sauce, and gallons of tomato soup - delicious - and given away thousands of the darlings. I am now so desperate I knock on neighbours' doors offering bags of toms.

And then it's the apples and pears. They've crept upon me. A month ago they looked pretty harmless, not doing much just  being uninteresting. Last week that all changed. My two pear trees, little Conferences harming no one turned into monsters. Pears now hang from them like pawnbroker balls. I'm harvesting but  I don't know where to start. They litter the house - I have at least three a day - it has encouraged me to buy Lidl's Roquefort cheese which goes so well with a sweet crunchy Conference.

Then there are the Cox's Pippins. They frankly overwhelm the poor apple tree and my ability to crop them. I am spreading nature's largess across Walthamstow., but already my neighbours are getting blase about my toms.

I'm opening up a new front. My infinite lines of beetroots. Such a delicious vegetable, marinated in my own secret recipe French dressing. The endive is coming on nicely and will flood  all parts south of the North Circular.

This year my Butternut squash have behaved, being kept in check by the forest of tomatoes. I look forward to my celery - only 10 plants and the modest herd of celeriac.

Next season it's more is less. If I can only keep my sense of proportion!