"Fire I'll take you to burn" 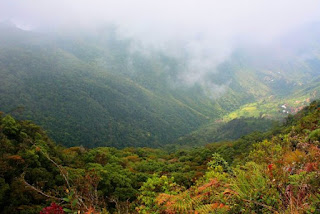 In those far off days when we didn't know about global warming the USoA was dropping napalm across a wide expanse of the South East Asian jungle.At the time we were more concerned about young girls having their skin burnt off by that nasty concoction than the damage indiscriminate fire bombing  and the use of defoliants was doing to the forests of the region.

So when the West expresses concern about the fires in the Brazilian rain forest: you should wonder why now you object. We blitzed South East Asia but no one stood up for panda, buffalo, apes or the indigenous peoples then.

You can excuse that. We weren't so clued up on how much damage we could do to the planet. It's a big place and we're small. But now we know better. Well some of us do. Scientists,ecologists and a  16 year old Swede but the rest of us are frankly stupid or selfish or both.

Somehow, we buy into the idea that you and I can have continuing consumption provided by a finite resource (Earth) without having any detrimental effect. We don't, I think, consider what would happen if, quite reasonably, the rest of the planet sought and achieved the West's level of consumption.

A rant: What gets my goat is the idea that to live in the centre of a large city you need to drive a vehicle that is uniquely unsuited for the city. Surely we should be building smaller cars not bigger ones. The 1959 Mini is a third of the size of the modern Mini. Madness.

Consumption is what fuels economies. The UK is 80% home consumption - which is why you're constantly bombarded with ads about settees and mattresses. The logic of this is that we have to consume but consume at an ever increasing level. Is it surprising that Storage companies proliferate along motorway. They store all the stuff we've bought and don't know what to do with.

But what's Storage companies got to do with fires in the Brazilian rain forest?

It's all to do with (over) consumption. The rain forest of Brazil are, in consumer terms, a wasted asset. Open up (cut down and kill off ) the forests to commercial activity - do you know what wealth is beneath those tree roots - and you can shift Brazil into the major league. It's a nonsense. Rather than thinking smart - like sorting out the wasted economic potential of its huge urban population - they're allowing the rain forest to burn and risking their and others future.

Contrast this. 40 -50 years ago the USA was able to invade Vietnam, Cambodia and Laos and  wreak havoc with the UN looking on. Yet we can do nothing about frightful damage to the Brazilian rain forest. If there's a war to be fought it's not only against this but also against human selfishness and the lunacy of continuing and increased consumption.

If we fuck up - we all fuck up.
Email Post