Cheese Fondue and a Chicken Brick 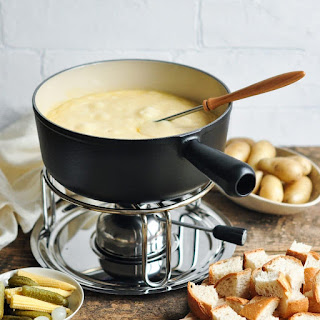 I first learnt about the cheese fondue around 1976. Before then my excursions into haute cuisine were limited to a can of Fosters (directly imported from Australia) and a prawn cocktail.

This new culinary experience took place in Tufnell Park in a large Edwardian terraced house - the home of a general surgeon and his nurse manager wife. We were in the basement dining room - soft low light - from candles I suspect - reflected off obscenely full wine racks of not quite First Growth estates. We, a lowly civil servant and his health visitor fiance were being initiated into the good life. A life we could only gawp at. Helping us appreciate how good life could be were a consultant gerontologist and his health visitor partner - they lived in a regularly burgled part of Camden Town.

To say I was in awe would be accurate. Our host, a large man with plenty of opinions, handed out the wine in large professional glasses. Our bottle from Sainsbury's no doubt was gifted to the local charity. Little did we know at the time but these fondue evenings were the cause of a split between the two medical families. The consultant gerontologist's meandering hands under the table were doing more than picking up his dropped serviette. That ended our regular dunks into Swiss cheese, garlic and a not too expensive white wine.

When we set up home ourselves and were seeking to establish our (lower) middle class credentials we, of course, brought out the fondue set. I can't recall where it was bought but I suspect John Lewis or Habitat. We'd invite friends around to sample Sainsbury's latest wine range, mixed with good talk about the arts, politics and the theatre as we dipped our bread into the bubbling mass of Switzerland's best. We were still novices with the fondue set, as we experienced minor stabbings, abandoned floating bread and searing hot cheese on extremities. Some of our wiser and more middle class friends were worldly wise in the world of fondues. The best bits were the burnt pieces on the bottom, with the intense flavour of cheap white wine and caramelised cheese. We all learnt so much!

And we graduated to fondue with bubbling oil, meat and raw vegetables! I don't know how this happened but there we were, one evening dipping chunks of pork, beef and chicken into hot oil and then immersing that into rich sauces. I can't recall what wine was served on those evenings

But then suddenly it ended. Fondue sets were the pits...and we moved onto the Chicken Brick. It was an epidemic across North London. Every street you walked down reeked of chicken , rosemary and garlic.It was so simple and of course nothing like the roast chicken you'd had at Sunday lunch with your parents listening to the Light Programme's comedy show.

This terracotta pot, vaguely in the shape of a chicken had enraptured the middle classes. Well, it was so simple. Get your Chicken Brick and rub masses of garlic on the inside. Baste the chicken with oil - not sure we'd discovered virgin olive oil then, stuff an onion up its arse and drop in a few sprigs of rosemary - if you were hugely on trend - French Tarragon and slap it in the oven at 180C (fan) for an hour or so. If it sounds familiar it is. Your mother's roast chicken without the fancy oil, garlic and herbs. I suspect it was served with french beans, courgettes, sliced tomatoes and new potatoes.

And after a while that also died a death. I'm not sure what took over 'cause about that time I left my wife and was living it up on Chinese take-aways and pork scratchings.

But I see fondues are coming back into fashion. It's all rather sad. Our children and grand children making the same mistakes we did 40 years ago.
Email Post