Breaking up is hard to do

I have bought a new desk top computer and a very (at least to my eyes) large monitor. Why? I'm asking this at the wrong time. The question I should have asked a couple of days ago is "why do you think you need a new computer (and monitor).

I'm not one who necessarily buys what's new, on trend, ahead of the curve. I'm of the view that if ain't broke...My clothes are functional, long lasting and suit, so I won't buy anything new just 'cause my shirts are out of style. If they come up a treat with a wash and iron - fine. Same as our kitchen -it works. It certainly isn't anything like that portrayed on the TV. The washer, dishwasher and hop (induction!) are quite old, replaced at the same time the doors and top of the then 15 year old  kitchen were replaced. We replaced our bed and mattress a couple of years ago at huge expense - but the chances are that's the bed I'll die in. And old is good. Good wine gets better as it ages, people spend loads on old stuff - patina is class - that mixture of old sweat and grime adds pounds to any old piece of furniture.

So why am I ditching my Dell XPS THX TruStudio PC? 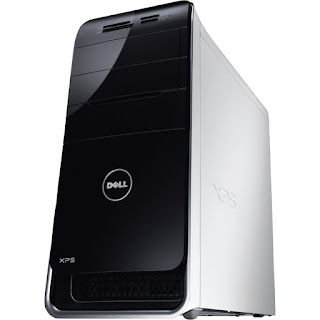 The thing is I'm a victim of speed. I want things faster, sooner, right now. If people don't reply instantly to my e-mails or Tweets I get affronted. If any customer service can't get back to me instantly giving a full and complete answer to my complaint; I'm onto the regulator. As I get older and slower,I need more and more speed.

My Dell is ancient - it was manufactured in 2011 , only just after the Tory/Lib Coalition and the London Olympics and 4 years before my mate Peter was married and that's ages ago. It proudly displays that it's Intel Core i5 powered with 990 Gigabytes of hard drive and just a few of RAM. It was loaded with Windows 7, two generations ago! Mind you it was streets ahead of my Sony VAIO which still has pride of place by my computer desk.  I ran both together for a while since I had the business software on the VAIO and I didn't trust anything else. That worked until I forgot the log in sequence to switch from one PC to the other.

My Dell was primitive broadband wise 2.4 Ghz only so when Virgin upgraded their modems it was stranded I had to buy a UBS adaptor to give me dual band. And it is slow. Firing up sometimes takes an age - Windows 10 and it constant upgrades don't help ( Is Windows the new Adobe of upgrades). It hangs so often and yet sometimes she's as sweet as a Canadian Goose on ice. She sits there at eye level blinking, if I'm lucky, and sometimes whirls scarily.


She's seen me through the excitement of downloading a free Windows 10! linking to Drop Box, Goggle Drive and Microsoft's One Drive. It's seen me sign up to Twitter and sign off Facebox. It has seen my e-mail traffic grow exponentially and kill iTunes for Windows. She's backed up more than I can remember or want to forget. She stores my wife's history of beading work and ideas over the past 7 years and more - having moved stuff from the VAIO. 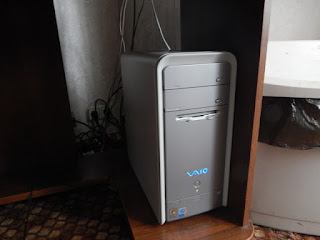 She's dusty. She has two optical drives that haven't been open in years. Last week I discovered a CD of a talk I gave in 2006. It has all my poems, all my blogs, the history of my involvement in our street parties and as I look on the hard drive I see what I've deleted to save space. It's near Tetrabyte drive is less than one tenth full! 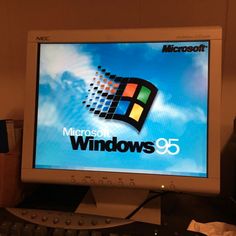 In the early days when I had no history, there was no consideration given to transferring stuff from the old PC to the new model. Now there is so much of me on that Dell hard drive. Oh, I'm not such a Luddite: much of my stuff is on my phone or Mac Air and stored on the Apple Cloud or more and more on Goggle drive, but somehow having it stored a few feet away from me is more reassuring. Like an old friend close to hand.

It's going to be a while before I gather up the strength to do the deed. Transfer all those bytes of me to my new PC and then wipe my old Dell's memory clean so she can find someone new to be a  servant to.
Email Post