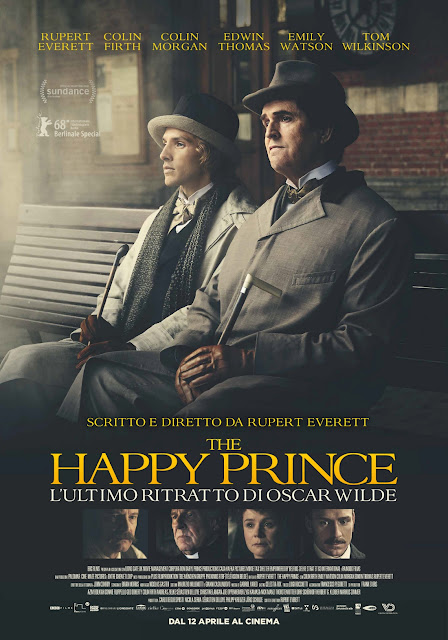 I like to review what I've seen at the theatre and cinema during the year, and looking back, 2018 wasn't as packed as I'd imagined. When people asked whether I was a regular theatre goer I'd reply "Oh yes, one or twice a month at least." Well I mis-remembered. I have seen quite a few productions this year. Bad planning on my part has meant two or three in one month, and nothing for an age. Also lousy calender management has seen me having bought tickets and then offering them to someone else because I'd double booked.

Also, memory is faulty. Thinking about the stand out production this year my immediate choice was "The Ferryman" - except we saw it at the National and that was in 2017! And so with a combination of ticket stubs and my diary here is my theatrical review (stage and screen) for 2018.

It started quietly enough with Bergman's "Wild Strawberries". The NFT was holding a Bergman retrospective so we saw that and "The Seventh Seal" in late January/Early Feb sandwiching "The Twilight Zone" at the Almeida. An interesting sandwich it made the filling based on the 50's/60's Rod Sterling's "Twilight Zone". It was a joy. Lots of humour and horror interspersed with theatrical trickery - as I write this I wonder if I'm not making all this up!  Bergman is a slow burn. Lots of incidentals, accumulating to create a wonderfully inhabited world. Why is black and white so compelling?

An early highlight was the staging of "Julius Caesar" at the Bridge Theatre in February. The stall seats had been taken out and was part of the performing area with a large part of the audience milling around with the actors and the action as part of the Roman plebs. Hugely effective, although  I couldn't get used to a female Cassius. Top notch cast with Ben Whishaw as Brutus and David Morrissey as a devastating Marc Antony.

Only one visit in March to the Donmar to see "The York Realist" A Peter Gill play set in a cottage in Yorkshire in the 1960's. Working class farmer and middle class artist from London discover love but backgrounds make the relationship doomed. That's it in a nutshell. Beautifully acted and moving, although I found myself fidgeting during the flirting scenes: still find homosexual relationships unsettling - my lower middle class, post war background I suppose.

In my diary I have "Prince Charles Cinema" for the 4th April; but have no idea what we saw. Looking up on Google I find it was "Call Me By Your Name" - a love story between an older man and young 17 year old. For someone uncomfortable with such themes, I surprise myself with my perseverance.I think this resume says it all.

"It's the summer of 1983, and precocious 17-year-old Elio Perlman is spending the days with his family at their 17th-century villa in Lombardy, Italy. He soon meets Oliver, a handsome doctoral student who's working as an intern for Elio's father. Amid the sun-drenched splendour of their surroundings, Elio and Oliver discover the heady beauty of awakening desire over the course of a summer that will alter their lives forever."

In early May we see "Beast" at the Barbican Cinema. A really good British film. Complex, thrilling and again really atmospheric. May also saw us visiting the Theatre Royal twice to see two plays put on by  the Maly Theatre of St Petersburg. "Vasily Grossman's "Life and Fate" and Chekhov's "Uncle Vanya. Both were performed in Russian with superscript. We left the Grossman after the first act - that would appear to have been a major faux pas, because every review stated that after the first act the play and performances were magical. Ah well. The next week it was "Uncle Vanya". Even with Putin and the Russian Mafia - Russia has much to love. This gem is one. A genuinely glorious play, full of humour, humanity, sorrow and redemption. All in one room!

May hadn't finished with us. There we were at the Lyttelton watching "Absolute Hell". A most fitting title. I thought it dire, disconnected, meaningless and a waste of a large cast. But I can say that having spent 54 quid on the seat.

After all the heavy intellectual stuff in June  we relaxed with a "Quiz" - the dramatisation of the "Who Wants To Be A Millionaire" cheating episode.  It was great fun, with considerable audience participation. Not sure I left the theatre a wiser or better person but there would be plenty of opportunity for that later on. Towards the end of June we saw "The Modest Soprano." a love story, interwoven with the trials and tribulations of founding Glynebourne. Roger Allum, a favourite of mine, played the Etonian science teacher John Christie whose admiration for the works of Wagner leads him to embark on an ambitious project: the construction of an Opera House on his estate in Sussex, Glyndebourne. Not too intellectual or heavy, possibly somewhat mawkish but only just. Anyway Allum was worth the price of the ticket. The month was rounded of by an amateur production of "As You Like It" at the Walthamstow School for Girl's performed in the concrete Greek amphitheatre built by the unemployed in the 1930's. Magical play in a magical setting as the baking sun slowly set giving way to deep purple and then blackness. And it was only 5 mins from home!

July was in its stride and hot meaning just one trip to see Hitchcock's "Vertigo". No more needs to be said other than it is rightly seen as one of the greatest of films. I missed out on "Red with R" as I'd double booked. Luckily the person who got my ticket didn't think it was much cop.

August was also a bit of a desert theatre wise with just one visit to the Lyttelton Theatre to witness "The Lehman Trilogy". A three hour tour de force which was totally absorbing...and how the mighty are brought low by over-reaching. We were brought low as the only "seats we could get were "standing". Three hours on your pins!

Now we were into September and "Imperium 1: Conspirator" - the life of Cicero in two parts - I passed on part 2.I also passed on "Aristocrats" at the Donmar having once again double booked. But I did see "The Children Act" with delightful Emma Thompson as a put upon Family Court judge. Can't remember much of the film but think I enjoyed it! And then the biggest disappointment of the year...

..."Allelujah" the new Alan Bennett play at the Bridge Theatre. I booked that at the beginning of the year. But it was a nothing play. Set in a hospital with loads of old people banging on about this and that and it was all very amateurish. I suppose it's best to lay down the quill in good time.

As the night's lengthened we found ourselves at the Duke of York theatre watching Sir Ian McKellan in the title role of "King Lear". It was a cut down version in that we had such a restricted view we only could see on half of the stage. Luckily for us, Sir Ian spent most of the time where we could see him bellowing to unseen dramatis personæ. A new twist was to see Regan or was it Goneril portrayed as a sexual predator with St Vitus dance. Seen the play loads of time and this was very effecting - even if much of it out of sight. Later that month in late October we saw "I'm Not Running" at the National. Basically it's girl university student and boyfriend. They break up: she becomes a doctor, he a professional politician. She campaigns to save a hospital and in so doing become a hero and an MP. Meets up with her ex boyfriend in Parliament etc and doesn't like his attitude. She could be party leader and plans to stand, but things get in the way including an alcoholic mum, a gifted immigrant girl working for her as intern who unfortunately dies suddenly in her office. In the end she decides it is all too much and decides not to run for office.

November and December saw two plays with brilliant performances. although the plays themselves were flawed. First it was "The Height of the Storm" by Florian Zeller. Having seen "The Father" and "The Lie" by the same author and with Jonathan Pryce and Eileen Atkins in the lead roles this was a play to anticipate. Florian messes up your mind. In this play we are very confused. There's been a funeral - it's JP's character's wife, but then she appears and carries on doing everyday things. horrible daughter and even nastier estate agent son in law turn up. But is this because of the funeral or what? Is the husband hallucinating or remembering? The acting was so everyday - no signalling "this is real: this is fantasy" malarkey so you didn't know what was what. A disturbing experience.

In December we were back at the Duke Of York's Theatre being treated to an astonishing performance by Patsy Ferran as the love obsessed  Alma Winemiller, a minister’s daughter and singing teacher. She obsesses over boy next door for years. A young doctor he hasn't shown much interest in her. In Tennessee William's "Summer and Smoke Alma is rather spiritual in outlook and also suffers from panic attacks - we suspect something to do with her pent up sexual frustration and desire for the next door son of the local, pretty nasty doctor. They nearly get it together - he's keen to "take her upstairs" - read that as  sexual intercourse but she's more into soul and beauty. So it's no can do.

The setting is an oppressive Mississippi town, full of heat and weird characters. He goes away, comes back next summer. In between she has come to terms with her physical needs but, would you believe it, he's now more concerned with the spiritual side of things. So even though she'd happily go upstairs he settling for a career, family life and no hanky panky. The ending is a terrible cop out! But a great performance by Patsy.

And that's the theatrical world of 2018. Oh! missed out three films. Rupert Everett's "The Happy Prince" about the last years of Oscar Wilde's life in exile after his release from prison. Do see it if you can. In the desperation of his circumstances Wilde is shown as a suffering giant who finds redemption through his suffering. Then there was the British caper "The King of Thieves" - much swearing and comedy. And in December we saw "Citizen Kane"!
Email Post