"You're only supposed to blow the bloody doors off!" 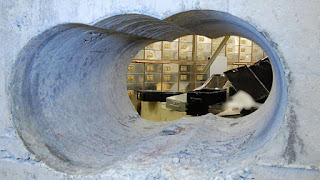 We love our old darlings. Actors who we've grown old with. Whose crinkly, weathered faces we've marked over the years. So "King of Thieves" was an obvious choice, especially on a miserable Sunday.

Th film was showing at our local Empire - possibly the best thing that has happened to Walthamstow since William Morris - but more of that in a later post. There we were at 12:30, having paid for our senior ticket, surrounded by others of a similar seniority except for three Eastern European types who arrived with 3 course meals to sustain them through the one and half hour film.

We could have arrived 15 to 20 minutes later and missed the  totally misjudged adverts. I do not have rippling abs, or go concerting 'til the early hours. Neither am I impressed by a smiling child buying chocolate for her mum.

Michael Caine, Tom Courtney, Ray Winston, Jim Broadbent, Michael Gambon, Paul Whiteouse ....and Francesca Annis. Names to conjure with and players in this safe cracking drama based on the 2015 Hatton Gardens job. The film started with much promise. The Small Faces 'Whatcha' gonna do about it", sexy jazz club and Michael C and Fran. Except she dies during the first middle eight.

What do you do when you're an old lag, promised your dying wife you'll go straight and live in a very nice house in a lovely part of town. You plan one last big job. Except for a thirty something sparks who sells you the job you bring out of retirement your old mates. Most of whom, unlike you haven't exactly made a success of their chosen career.

The Michael Caine's character Brian Reader is a latter  day Michael Caine character, which is just fine by me. He's the one, encouraged by Basil a convict gone straight and trained as an electrical whizkid to break into the safe room in Hatton Gardens where loads of gems, money and gold is kept secure.

Together they sell the plan to Terry (Jim Broadbent), John (Tom Courtney), Danny ( Ray Winstone) and Carl (Paul Whitehouse). Basil has obviously spent a lot of time thinking about this heist. He's plans, keys and the technical know how. Why he should use a load of superannuated robbers is unclear but despite all their physical disadvantages, hip replacements, early onset Alzheimer's, stupidity and a double dose of type 2 diabetes they manage to pull off the crime of the century.

There is a huge amount of f*** and b*** much use of Cockney rhyming slang  and it is very funny until they'd successfully bungled their way into making this mega robbery. Afterwards these lovely old coves turned on each other like rats in a bag. It wasn't nice and frankly wasn't that dramatic.

The way the police tracked them down was impressive, except so incompetent were our robbers that a blind man could have sussed them out. No, the second half of the film lost its mojo.

The last scene of the film was poignant when the five robbers were going on trial we had flash backs to their glory days as actors. I felt a pang of regret  as I saw the snippet from "Billy Liar". And as Michael Caine headed for the dock I couldn't help remembering the fabulous "Italian Job".

But frankly I didn't care. I just loved seeing our lovely lovelies together on the screen.