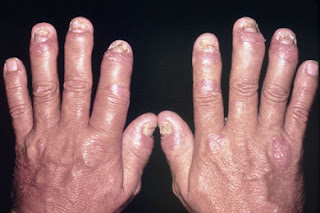 My life with psoriasis. It's a pretty bloody story.

I've had  psoriasis since I was a teenager - except I  didn't know it. The frantic scratching of my scalp  until it bled was "dandruff". It got so bad I used Dettol.

Strangely it only effected my scalp. All through my teens I had a large red crusty scar on my forehead. I'd scrap it off and it would ooze. I grew my hair long to hide the scar.

Psoriasis of the scalp is gross. What happens is your head grows a carapace of dried skin. Imagine - lifting off the whole of your scalp. That's what happened when applying  Ung Cocois Co a mixture of coal tar Salicylic acid and  Coconut oil.

It was rather messy. So as not to stain the pillows etc, I'd wear a large plastic cap. As a 27 year old it didn't help getting laid.

Psoriasis was kept under control for 20 odd years. Betnovate was ditched - and I switched to Dovonex and some stuff that stained all my clothes. Then in 2006 I had pain in my wrist. My doctor thought it was gout and I had a couple of uncomfortable months misdiagnosed.

The consultant I was referred to diagnosed Psoriatic arthritis (PsA) . A steroid injection bringing almost instant relief  confirmed his diagnosis and I was put on Diclofex to ease the pain and given exercises to reduce the inflammation.

Methotrexate: When I heard I'd be on that I was scared - it has a fearful reputation. Initially it made me tired and giving up wine was a problem, but it worked. not only were my joints free of pain but my psoriasis was clear. The monthly blood tests and bi-monthly check up were annoying but I was pain and scab free.

Then I had problems with my lungs. Really bad coughs, unshakable infections. After a couple of bad bouts I told my doctor - take me off M.

After a month or so my skin psoriasis came back in spades, but my joints were ok. That was five years ago.

At my last consultation in February this year I was fine. No pain, no deformation of joints. I needed no drugs except the stuff to keep my skin scab free!

I went to Antarctica in March and kayaked. Not a problem. I'd even preliminarily booked a sail boat trip there.

But recently things are not so good. I am often tired (a usual effect of PsA), my joints ache. At night I have difficulty in sleeping because of the deep pain in my legs. I'll walk and my leg will give way - pain in my hip.

I'm trying to evade PsA. I work a lot on my allotment. Go walking. Do distracting things like going to the theatre, writing but..

Philip CC said…
Barry - that sounds like very hard work. So sorry to hear it. I'd no idea. Puts my concerns over occasional dry skin in perspective. If the pic of hands is recent that looks like some sort of misery.

However you still have considerably more hair than me ....