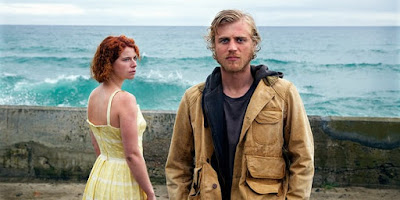 Yesterday I and a mate went to see "Beast" by Michael Pearce with Jessie Buckley as Moll and Johnny Flynn as Pascal in the lead. Set in Jersey Moll's a put upon daughter of a control freak Mum whose churchy, sense of right and wrong and lack of love screws up an already damaged woman.

Moll is kept down by guilt for a crime she committed as a young girl.The only sympathetic person in her family is her demented father - and with a wife like his he was well out of it! Moll's sister and brother are selfish, spoilt, uncaring shits and the only man ( I use the term advisedly) who shows any interest in Moll, an intelligent, open face beauty, is a wimp of a police officer. (In this film the police do not shine).

Frankly I wasn't surprised when Moll stormed out of her own birthday party after being treated like shit and humiliated. She went into town (is that possible in Jersey?)  got picked up at a disco, got roaring drunk and was rescued the following morning by Pascal from the rather nasty young man.

Storming out, screaming, enjoying great sex with Pascal and uncontrollably bashing a poor bunny rabbit to death with the butt of a gun, made you think that not all was right with our Moll noggin wise.

She had a temper which her freaky controlling mother had kept a lid on. Pascal was her ticket to freedom and once away from Mum that anger was harder and harder to control. The beast in her got stronger and stronger throughout the movie. And if you hadn't got the message, the final scene of Moll dirt and blood splattered back lit by a wreaked car's headlights looking like Lon Chaney Jr. on a reasonably good day rammed it home.

Oh, there was also a series of murders of young girls going on in the background (Must check Jersey tourist figures for this year) and Pascal is the clear favourite. There's a couple of gem scenes - Moll freaking out the distraught mother of a murdered child at her funeral and roaring at two decidedly nasty white fathers - scared the shit out of them (and me) and quite right too.

It was riveting, with great acting from the two leads, super location shots and enough ambiguity to keep you switching sides. But what really got me; had no one thought of putting Moll on an anger management course? That made me see red!
Email Post