"If You Want to Be A Polar Animal" 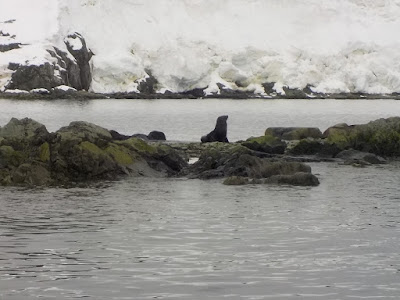 I had an e-mail from an old friend (all my friends are old!). Yesterday he attended a lecture on Antarctica at Wolfson College, Cambridge given by  Jonathan Shackleton,cousin of Sir Ernest. The talk was at the Trinity College Dublin Association (Cambridge Branch) Spring Event. Apparently JS is an alumni of Trinity. My friend said the talk was highly amusing - constantly being interrupted by the England - Ireland rugby score.

As far as I'm aware my friend has never set foot in Ireland, and got his degree from Bristol so I'm at a loss to know how he managed to be organising talks for the Association.

JS's talk was  cryptically titled "A Dead Man’s Friend: penguins, a priest and polar people". His books are published by Penguin!

It's been a strange two days back. I've difficulty sleeping but when I do, it's invariably about being on a boat and heading home. I fell asleep on the sofa the other day and it took me an age to figure out where I was. On waking I could have sworn I was in a cabin - I didn't  recognise our front room. I'm also feeling wonderfully well and, well, bouncy - that's the only way I can describe it. It's the Antarctic effect. I feel so lucky to have had the opportunity to go there and experience the sheer wonderfulness of the place. My mind's eye overflows with images of the bays, the ice, the mountains, sea and sky.

So I'm planning a return trip. I've already made contact with a company that offers a 17 day sailing trip - fly there, sail back and spend days camping on the Continent as well as loads of opportunities to kayak. It's hugely expensive and I'll have to send the missus out to work and line up the cats  for pussy shoots but that's my direction of travel.

In the immediate future it's more kayaking - in Finland or Norway or the River Lea!
Email Post