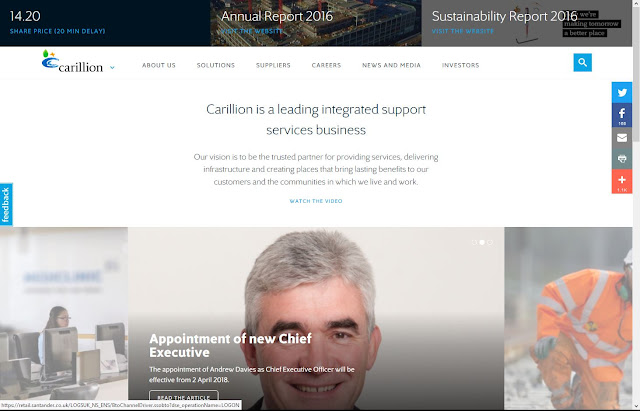 Bet there are a few "Warm, Wet, Circles" in the Department of Transport and the Cabinet Office today following Marillion's Carillion's collapse into a sink hole.

Such significant business failures as this expose the raw nerve of our country's sense of self. We're now told that this was bound to happen - it's been building up to this over the past 20 years.  Somehow, we feel this might be true. Something's seriously gone wrong...again.

Just listen to the news media today. Calls for a public enquiry into PFI, contracting out, reliance on just a few huge companies able to bid for massive public sector contracts, the lack of clarity in business finances, the inadequacy of central gov't to hold these companies to account, the scope for large payouts to CEOs and directors, shareholders and banks and the poor quality of service these companies are paid to supply. Failures of Corporate Governance, poor industrial relations, the sub-contracting regime that exposes hundreds of small companies to ruin as a result of this collapse. And then there's the pensions saga. No wonder people are watching dysopian TV series - they reflect all the insecurities we feel.

There's the rising tide of anger that we  allow the powerful, wealthy, influential and greedy to take all the gain and escape any of the blame. And a chilling sense that there's bugger all we can do about it. Certainly looking at the faces of the Ministers put up to "explain" this latest failure of neo-liberalism, it's clear the Government hasn't a clue.

If only the revelation of Henry Bolton's girlfriend's inappropriate tweets  had come a day later, UKIP's leader wouldn't be staring out of our TV screens trying to defend his dumped girlfriend and why he's staying on as head of UKIP.


By the way in December the Government heralded its "UK Industrial Strategy: a leading destination to invest and grow. How the Industrial Strategy will ensure the UK remains one of the best places in the world to innovate, do business, invest and create jobs." Just a month after Carillion posted a third profits warning and won a £200 million British Rail contract.

You couldn't make it up!