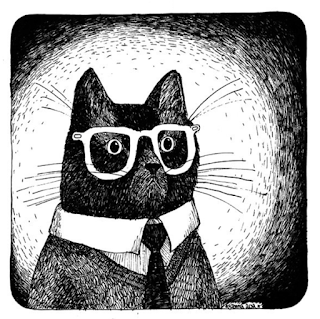 Cats: we love 'em. We have four registered at Mews Cottage but this number is supplemented by other feline interlopers. 6 at the last count.

Take Esme and Pru. Both come from good homes, their owners are clean, well behaved and hold down steady pensionable jobs but their cats insist on eating at our place.

Esme is a young calico cat with a collar and tag which reads "My name is Esme and I'm not to be fed." Esme takes no notice, and neither do we. There she'll be at the front door insisting on her 10 am snack, followed by her 1 pm lunch and 4 pm top up. She'll appear on the downstairs window ledge and expect a plate of food to be passed out. We oblige. It's a delight to be greeted by her in the street. Once she sees you she runs down the road and sits on the front step waiting to be fed. So far we've had no complaints from her humans, despite the "nil by mouth" injunction being well and truly ignored.

And then there's Pru. A small, white bundle of hissing fury. It's no surprise, she was a child bride and had a family before she could use a litter tray. A spell in an institution - Battersea Dogs and Cats Home and then placed with a lovely family. She, however, can't forget her roots and her street wise character means she's always looking for a fight. Any slight is enough to set her off. Esme gets the back of her paw any time there's a plate of food on offer. So we put two out, some distance separating them and Pru can concentrate  on ensuring Esme doesn't butt in. Pru is known throughout the neighbourhood visiting every other house and usually complaining.

Now we have a new cat in our orbit. He/she just turned up - that's what cats do but this one has made itself so at home.

We have two chairs under the veranda, each with their collection of blankets and each owned by one of our four cats. Ginja has the most elaborate and comfortable chair with three or four blanket to provide the necessary softness for undisturbed sleep and relaxation. The other chair had recently been bagged by Dixie. Dixie idolises Ginja and the chair which is opposite Ginja's is ideal for hero worship. First thing in the morning, once let out through the first floor bathroom window and having explored the garden, just to ensure everything is as it should be, Dixie settles down on the chair to stare at her idol.

But now the new cat has taken ownership of not one but both chairs. This morning Dixie found her idol worshipping spot occupied by this new, very black and extremely pretty cat. Dixie being small and the interloper large she had to lump it. But not Ginja. Later that day he returned from his regular perambulation of the garden, making sure that everything was as it should be, to find this upstart asleep on his chair. Cats are sophisticated creatures often, rather than a physical frontal attack, they'll use psychology.  He climbed on the opposite chair and stared and stared and stared. Well, I don't know about you but an unwavering cat stare puts the willies up me. It did the same to the upstart pussy. Off they went and Ginja settled back in his rightful chair.

The new cat came back, ate some more food and in no time at all was back on Ginja's chair. We have had to put up with one extremely pissed off ginger tom. Even Dixie, his adoring acolyte, is of no help. Only hour long cuddles on the wife's lap and much sweet talking could smooth our delicious tom's wounded pride.

Cats, no wonder they are everywhere. They are beautiful, clever, companionable and know we love every hair and whiskers on their body.
Email Post