"Going up Camborne Hill, coming down" 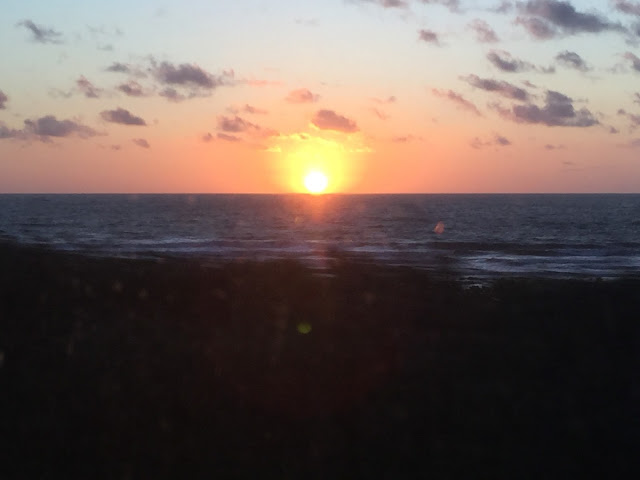 I've just come back from staying with friends in Cornwall. They're not on the Cornish Riviera - more the monsoon fields of Bude.

The grass is very green there - due to the average 400 inches of rain a month during the dry season. To be fair everyone was complaining about this year - even the locals. When it wasn't raining we had lovely weather which enabled us to see Poldark not being filmed at Castletown, and not eat at Rich Stein's fish restaurant in Padstow. We did however join the National Lobster Protection League.

My friends' place in Poundstock just outside Bude is amazing. They have sheep in their paddock! Well OK they're stationery sheep but they look very real. They have two Bearded Collies, Lottie and Luca, who are great at herding us up. I'm sure I've told you about Poundstock before. It has very few people, a church, a 16th century Guidhall and three cemeteries. One non conformist and a CofE with an overflow.

The Guidhall is the hub of the community as I found out on my arrival last Wednesday. A talk by a renowned local gardening expert who was going to let us in on the tricks of the trade. Viz:how to get rid of moles from your garden - get some badger poo and stuff it down their holes...There were other expert tips along similar lines. Putting a cat litter tray in the garden, letting all the neighbours' cats use it, pour the litter into a bucket, add hot water and strain it. I don't recall what you were meant to do with it next.

We went to Widemouth Bay to exercise the dogs and to meet dogs and dog lovers in the area. The beach is pretty impressive, with masses of worn down rocks which when the tide receded were exposed. I stumbled amongst the rocks and gazed into rock pools, turning over stones to see tiny crabs scurry away. It took me back to my childhood in Brighton and the chalky beaches of Rottingdean.

We discovered a newly opened micro-pub in Bude, selling Cornish beer and cider along with Cornish wine and gin. It's the county past time - setting up a micro brewery or still. We didn't have any beer or cider but the bottle of Cornish wine was not bad.

They love their fish down there -not surprising since Cornwall is very watery. The fish and shell fish is very fresh and delicious. For someone who only eats fish occasionally and then battered or as a fish finger I found the variety of seafood on offer intimidating. I did, however, have some really tasty dishes of fish, mixed with shellfish and other mollusc. That reminds me - the strained cat's piss is great at deterring snails.

My stay was over before it had begun and I was on the GWR from St David's Exeter to Paddington last Sunday afternoon. I'd booked first class - well you do when you're a baby boomer with an inflation linked final salary pension, no mortgage and a two up, two down in Walthamstow worth more than the GDP of the Central African Republic. The journey down was great. Lush seats and very few passengers and a hostess who couldn't do enough for you. The journey back was a different story.

I'd missed the notice which mentioned re-routing because of scheduled track repairs. I was surprised to see a student type sat in my reserved seat - in the First Class carriage. The train was packed: apparently GWR believe in wringing every penny out of its captured clientele. I was worried when we stopped at Bristol Temple Mead, really concerned when I spied the Georgian terraces of Bath and relieved when we appeared to be heading in the general direction of London when we bowled up at Swindon. And stopped, and stopped, and stopped...for 15 minutes. When I enquired why we'd stopped I was told that it was a scheduled halt. Apparently to pick up the contents of another train lost in the wilds of Wiltshire. The station announcement informed us that we were on the Paddington train - the next stop being that august station in west London.

So I was surprised when our train "captain" let us know that the train was stopping at Oxford to change cabin crew. As we pulled into the station three of the crew walked past me. There we were pretty pissed off with the overcrowding and delays and these railway men were whistling as they left the train. I swear they did it deliberately.

Finally we arrived at Paddington after a three and a half hour journey. There are two lines I can take to get home. The Hammersmith and City takes me from Paddington to King's Cross and the Victoria Line to Walthamstow or the Bakerloo Line to Oxford Circus and again the Victoria Line. I prefer the Hammersmith and City line, whose entrance is miles away from where the train comes in. I got there only to find the entrance to the station locked. So I have to trundle all the way back and catch the Bakerloo line. There was no indication anywhere on the station that that was the case!

The driver of the Bakerloo train to Oxford Circus must have had an equally frustrating journey because at every station he would close the carriage doors before anyone had a chance to got on or off. It was with some relief that I stumbled into our house around 9:30 pm.

I had a lovely time with our friends in Cornwall, but can we organise it so that it isn't so far away and serviced by GWR?