"We hate mices to pieces" 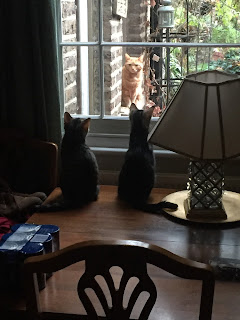 I suppose it was bound to happen. Our two delightful kittens Pixie and Dixie would show their true colours.

We innocently thought that those wide eyed looks, those pretty paddy paws that felt like velvet, those playful japes meant we'd been blessed with a couple of feline angels. sheer joy to us as we watched them gambol innocently and drink ever so decorously their special kitten milk and biscuits.

What fools we were. The warning signs were there from the beginning. The day they arrived the first thing they did -those little balls of fluff - was to climb the curtains and abseil down. They only did it that once the little deceivers.

The rapid destruction of our sofa, bought when I retired and so lovingly preserved took place while we were mesmerised by the enchanting antic of P&D. The terrorising of Billy Bongo, our magnificent male ginger cat - we thought a passing phase. Until we realised their tormenting resembled the hunting tactics of the two velociraptors in "Jurassic Park".

Then there was the mishap of peeing on the bed. At the time I thought it was an innocent mistake. Looking back I can see it was sheer vandalism and devilment. Pixie or was it Dixie, joined me in bed and promptly and very deliberately pissed on the duvet cover the duvet, the under sheet and the mattress  protection sheet. But it was silent, hidden and deadly.

My quiet Sunday Supp snooze turned into a washday panic as all of the bed linen was bundled into the washing machine.

After that they were banned from the bedroom.

In retaliation they crapped in the second bedroom.

We, foolishly, relented. They were allowed into the bedroom when two of us were there, and as the little blighters planned we were seduced by their oh so careful playing on the duvet. Then they came in unattended.

I should have known mischief was afoot. The other day Pixie had a crap in the litter tray and deliberately missed. She proudly placed a surprisingly large steaming turd on the oak floor. Dixie later stood on the side of the litter tray and propelled all its contents across the living room.

Not one iota of concern, embarrassment or shame, just a quick flick of the tail, a prodding of the dispersed litter and an inspection of the paws and then on to the next blitzkrieg.

This morning I had just eaten my Marmite and butter soaked crumpets - in bed - when Pixie jumped up  and started to attack my toes, then my fingers and finally my phone. I was full of contentment and Marmite and must have dozed off. On waking I felt a slight dampness on my legs. Throwing back the covers, I discovered deep penetration. The little blighter had peed on the bed again: but this time had improved on her technique.

The under sheet, the sheet and duvet and its cover have spent all day in the washing machine and the tumble dryer. Tonight we are sleeping under a tiger themed blanket. The kittens are on the sofa in the front room next to a hot, glowing coal fire with plates of prime tuna and a saucer of fresh cream.

Frankly, we might as well surrender. They have us completely by the short and curlies.
Email Post