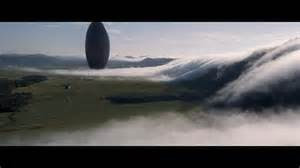 I just had to see it. The reviews have been pretty near unanimously "brilliant", and this Thursday "Arrival" docked at our local Empire.

It's been called an intellectual's "Independence Day", British film critic Robbie Collin gave it five stars out of five, claiming it to be an, "introspective, philosophical and existentially inclined – yet unfolds in an unwavering tenor of chest-tightening excitement. And there is a mid-film revelation – less a sudden twist than sleek unwinding of everything you think you know – that feels, when it hits you, like your seat is tipping back." O.K. Robbie, thanks.

It is good, no doubt about that. The aerial shot as the American investigation team first approach the alien ship is majestic, and we were treated to quite a long shot. The action slipped into gear almost immediately after that and continued to build. There were the good guys, the Colonel, the mathematician and the linguist and there were the baddies, the CIA, everyone else in the world but especially the Chinese and Russians, and some redneck army dorks, who tried to blow up the alien ship with a bomb! - well they voted for Trump didn't they.

The director was quite a tease since we didn't see the opening credits until the film ended.  For at least 30 mins I was expecting the film to "start". The sound track was as expected experimental and sombre.

The space craft was suitably alien. It was oblate in shape, in a  "National Trust" black matt  finish, smooth as a baby's bottom and no obvious means of propulsion. This is de rigour nowadays. Earthling spaceships are all lumpy with massive engines burning at full pelt so that one doesn't get confused. In "Arrival" the alien ship reminded me so much of the one in the opening of "Prometheus" with similarly inspiring aerial shots.

As with "Interstellar", humanity is rescued in the nick of time by the intervention of one person. I think I find both "Arrival"'s and "Interstellar"'s interventions hard to accept, but in the context of the films they both worked.

There's a lot about the non linearity of time - except I really didn't get that until - well - the film's brain boxes spelt it out. Very much like that theme in "Interstellar", but less convincing...

The aliens were a disappointment. They reminded me of creatures in a "Star Trek" episode or two. It's a difficult trick to pull off. How do you represent benign creatures. If they're out to zap humanity no problem: there's billions of images to draw upon, but a benign one, that's a real challenge.  I haven't an answer.

I'm looking forward to it coming out on video or Netflix, so I can see it again and again. I also look forward to more intelligent sci-fi movies, although not at the expense of treats such as "Guardians of the Galaxy".

Finally, I bought a VIP ticket at the cinema. When I presented it to the usher, she escorted me to the lift and to the VIP section. Imagine a gated community in a cinema. There in our separate fortress, 20 or so VIPs sat distanced from the hoi polloi: we even had our own loo!

The masses got their own back by switching on their mobiles and tweeting or messaging all through the film, and munching on gargantuan bars of chocolate, hot dogs, ice cream and pop corn. I counted at least 18 speakers in the cinema. They were needed to drown out the sound of noshing.

A note to Empire cinemas: up grade your VIP class to Trump class with some tasteful gold decoration and gilding and a buxom usherette dispensing cocktails and canapes. Just a thought.