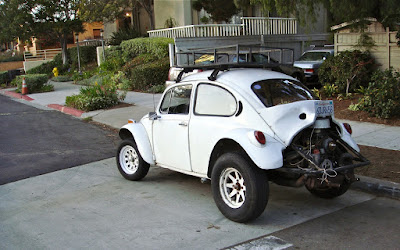 Last Friday I pootled up to St Albans to see my friend's new car. I would have gone on the Wednesday except climbing in my 10 year old Astra, I found it wouldn't start. To be more precise the battery was flat. Not only was it flat it was dead. That meant getting our brilliant mechanic who is just around the corner to zap in a new one.

By Friday the work was done. I knew that because returning from the doctor's I found my car  not where I'd left it. I went round to the garage and after handing over 70 smackers, I had my car back in full working order.

Our local garage is a miracle of operational organisation. The garage itself is tiny yet at any one time there are at least 20 cars being pulled apart, resprayed or retro-fitted. In the surrounding streets are parked all the cars that have been fixed, waiting to be collected, and all those that are to be fixed. How Mike ( the Mechanic) manages to keep this production line going without delays or mishaps I do not know. As far as I can see he keeps no written records - there is no computer logging in and out the jobs, no hi tech diagnostic software to aid his army of under mechanics and just one extremely attractive lady to keep the office in order.

Frankly, it's not an office. It's a small room with an old oil drenched table with a phone, a receipt pad and odds and sods of car accessories on it. The walls are plastered with old photos of Mike. The photographs are rather alarming as they show Mike at least 20 shades lighter than he is in the garage. His face is black with oil, his hands are black with oil, I suspect his hair when under the shower goes from deepest oil black to snow white. In his younger days Mike looked very much like Tony Curtis and the office has pics of the star on the walls. There is a photograph of Mike, in a suit, with his daughter at her wedding looking just like you or me - washed.

He's a local hero. Been in the business in the same building since before any of us can recall. The cars he services take up much of the parking spaces in the surrounding streets. But we don't complain. He pays a huge amount in parking permits, and he is a genuine local amenity. Helpful, pleasant and as honest as the day is long. A diamond geezer as we East Enders say.

Having had my car reflated I headed for St Albans. Aren't motorways wonderful! Onto the North Circular, then the M11 and thence onto the M25. Travelling at speed all the way...until the M25 with a 7 mile tail back because some poor soul decided to crash their car and hold up millions of pounds worth of freight and commuters. After half an hour the road cleared and I hammered onto St Albans.

As I turned into my friend's exclusive cal de sac I spied his new car. You couldn't miss it, it was so white. Luckily it didn't have customised alloys or blacked out windows. It was a sedate 1.4 ltr, Golf Automatic.

You don't appreciate how far cars have moved on until you sit in a new one. My Astra is now 10 years old but to me it seemed pretty up to date. I soon discovered that it is positively prehistoric compared to my mate's.

It's German, built in the EU. It conforms to all the EU safety, efficiency and cleanliness standards. I wouldn't be surprised if were biodegradable. And because it is German it is extremely bossy and literate. The operating manual is larger than a complete set of the Encyclopedia Britannica ( that's a collection of over 20 very large volumes for those too young to have been door stepped by an Encyclopedia salesman).

You don't just insert the ignition key, turn it and the engine roars into life. (Except this 1.4 ltr equivalent of Whispering Bob Harris is so quiet you don't know she's running). As it's an automatic it has to be in the correct gear, the electronic hand brake on and your foot on the brake before it will bother to consider starting. At which point the extremely clear dash flashes the latest EU directive on allowed temperature gradients for heated front seats.

To anyone unused to the technology now deployed in modern cars it's pretty upsetting when the central console bursts into life. First you're required to read a health warning and acknowledge that you've read and understood it. Then the phone link kicks in and the sat nav asks politely where you plan to head this journey. Luckily my friend's model doesn't have a proximity parking system or we wouldn't have managed to get out of his drive.

Automatic gears. Another revelation for those of us who grew up with Daffs and Hillman Imps and automatic gears that simulated a ride on the big dipper. My mate's system was intelligent. It had 7 gears and, I swear, was conscious. It knew better than you what gear you should be in, to save fuel, to over take and when to cruise gently with your girlfriend at your side as you both listen to Nat King Cole.

It also has automatic cut out. Members of the older generation know all about automatic cut outs. Embarressingly usually you're in a traffic jam when that happened. Not to spark back into life again unless bump started or hand cranked. Not this miracle of the car makers art. At a traffic light or in a queue it'll switch off its engine and wait patiently until the lights change or the traffic moves. A touch on the accelerator and she's up and running as if nothing had happened.

Scanning the dash, I was at a loss to know where the CD player was. I could find no appropriately sized slit in the dash for a CD (or DVD!). It was housed in the passenger glove compartment - a neat safety measure stopping the driver from being distracted  by trying to slip in his much loved Hendick CD.

We trundled around St Albans and then parked - my mate's inexperience of his new car meant that it took at least 3 attempts to get the car into a space and then he gave up and found one large enough to dock an aircraft carrier. After a delightful lunch in St Albans famed gastro pub - The Cock - we drove home wondering which gear the car would chose to engage and whether the tyre pressure indicator would flash, warning us that the rear near side tyre was slightly below the recommended pressure as shown on page 365, para 20 of the manual.

It's very zippy and extremely comfortable, quiet and wonderfully up to date in a wizz bang way. My mate drove into his drive next to his wife's Clio. Such as shame as the little Frenchie lowers the tone somewhat.

I slipped into my ancient Astra and noisily and manually headed home.
Email Post