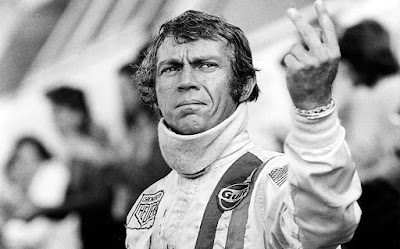 Another excitement filled week this week.

It began, as is increasingly frequent, with a ferocious attack on my face with my razor. The unequal contest between cold steel and my old, yet unlined, face invariably ends in a blood dripping nose or chin. The nose unfortunately gets in way of the blade as I attempt to cut away the stubble that stubbornly grows in the nostril opening. Despite my efforts, no matter how precise and careful I might be I snick the tip of my nose opening a torrent of blood letting that turns my exotically perfumed bath water pink.

Wednesday, being a day of some importance, saw me unshaven.

I don't know about you but the sight of a inexpertly shaved Hale and Pace suggests early onset Alzheimer's or something worse.

Given the significance of the appointment, I pulled out my one and only Paul Smith shirt, purchased during their Convent Garden winter sale when I had more money than sense. I chose a pair of charcoal black strides, fashionably cut to suggest chic but to hide my stomach. On my feet a pair of sophisticated pointed City shoes - hinting at wealth and experience coupled with financial acuity.

I had thought of wearing a toned down hipster ensemble. Pale slim cut, hip hugging, buttoned up jeans, a white shirt and black Hush Puppies: but given the event I thought something City slick might be more effective.

I slipped into my black Vauxhall Astra, 1.7 CDTi and melted into the traffic on the North Circular. I was heading for St Albans. I was late, but not so late. I called my contact  but no reply. I thought maybe they'd been kidnapped or possibly slept in. Foot to the floor I hammered up the A406 and onto the M10, before hanging a left and screaming onto the M25....

Luckily, for once, I was heading in the right direction: west. The traffic was heavy, but I got myself onto the outside lane and stayed there...much to the annoyance of the extremely large German cars sitting on my tail. The speed limit is 70 mph. I was at the limit and no one should be going any faster...it's against the law.

The exit for St Albans hoved into view. I'd been there countless times...but still get confused at the first roundabout. If I wasn't careful, in no time I'd find myself back on the M25 heading for Stanstead. This time I found the correct exit and then fortunately did not mistakenly head for Ayletts Nurseries. Whilst extremely diverting, I would be quite a way from my intended destination.

After a few minutes drive I found myself parking outside an imposing house in the better part of St Albans ( Yes, since you ask they do exist!). I'd broken my journey to buy the lady of the house a large bunch of flowers: she'd recently been through Hell and survived.

My old time friend filled me in. Our appointment was at 2 pm, it was across town and on the way he had to make a drop. We had just enough time to discuss what vegetables he might grow in the allotment at the end of the garden and whether muted pinks would work as an overall theme for his take on the Stow Gardens in Buckinghamshire.

We took his car, an ancient jalopy that had seen better days: a 2005 Astra treated like an old war horse. She needed to be put down and we were the ones to do it.

The Vauxhall dealer was a very nice young man. My friend had pre-booked a test drive in one of the latest Astras: an SRi - all gadgets and poke. For some reason I had to pretend that I was also interested in buying a new car. I asked all the right questions - did it have an electronic hand brake and ambient lighting - all of which I liked in the earlier model. "No", I was told, but I could do wonders with my iPhone, and with Vauxhall's car park in the Cloud, should I have an accident or lose my contactless key, they'd be with me in a jiffy.

And so to the test drive. There in the court yard was this very red, very mean machine. We got in, the salesman fired her up and took us for a spin - round the delightful starter home estates that blight St Albans. Then it was my mate's turn to see what this monster could deliver. He didn't do one right hand turn - left, left and left. As we were hammering up the streets of outer St Albans we learnt that this machine had mega sat nav, mega driving assistance, DAB radio and wi-fi. It wasn't a car: it was a technological wonder...slowly trundling around the nondescript streets of Hertfordshire.

The car stopped, panting and we changed drivers. I was at the steering wheel and she was keen to show me her paces. After a slight hiccup - with 6 forward gears reverse is where 1st is on my Astra - we headed off down the road, left, left, left...I turned..left..and..left again. I was so shocked when I was told to turn right I nearly stalled the car on the roundabout. I drove us back to the dealership and parked. At which point I asked about the self parking options since I'd managed to straddle two parking bays.

Then down to hard bargaining. Except with 5 years' interest free credit, no deposit and an 8% discount if you or any of your relatives were  members of the human race, there was little to bargain. I forgot to ask what happened if you paid cash up front.

£18k to £19k is a lot of money: especially if you only do 2000 miles a year. My friend is keen to replace his car as is his wife. They have this huge house, fully done up with a new drive and double garage and one very nice newish car and my mate's well used car. It doesn't add to the curb appeal.

However, in the circs I'd keep my mate's car in the garage and only bring it out after dark. And possibly buy an inflatable model of a Merc or Audi to fool the neighbours.