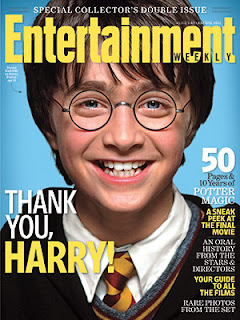 On Monday I went to the theatre with my friend Roger, Roger having just returned from a cruise to the White Sea (and back). The last play we saw together was Harold Pinter's "The Hothouse" with Simon Russell-Beale - a renaissance man if ever there was one - and "Life on Mars" and "Doctor Who" evil lead John Simm. This time we were at the Noel Coward Theatre  where we saw Simon in "Privates on Parade" in January.

This time it was to get a glimpse of Daniel Radcliffe in "The Cripple of  Innishman" by Martin-Mcdonagh, a writer unknown to me. Me, Roger and a million, billion Potterettes saw the young wizard turn into a grotesque cripple with a passable Irish accent that wouldn't shame "Mrs Brown's Boys".

Actually it's a shame that I know the Irish TV comedy because all the way through this rather light,but extremely enjoyable, play I kept thinking of Mrs Brown. That was because of the gross Irish characterisations - impossibly broad accents, wonderfully silly exchanges and a weird plot - if plot it was.

There were some notable characters. The two odd aunts who ran a run down grocery store that appeared to sell only tins of peas. The village gossip who paid  for his provisions by disclaiming the latest news. His 90 year old mother  he was slowly killing with a constant supply of whiskey and pocheen. And the over active, extremely bright young girl who has a passion for eggs and smashing them.

As for Daniel's character "Cripple" Billy in appearance he is the love child of Richard the Third and  Bellatrix Lestrange. I imagine that for the Potterettes his appearance was quite a shock. Even more of the shock must have been the fear that Billy had been killed off in a 1dollar room somewhere in the USA after less than 10 minutes on the stage. Happily for the extremely garrulous young ladies sitting behind us the play had a twist in the tail and Harry Potter, sorry I mean Billy, pops up in the rest of the play.

Billy is an orphan, knowing little of his parents who died by drowning when he was a babe in arms. Billy reads a lot, has a crush on the extremely bright egg smashing girl and spends a lot of time staring at cows. A Hollywood film crew is on a neighbouring island and Billy persuades a local fisherman to take him over to the island using a  forged letter from the local doctor suggesting that he has only a short time to live as he's suffering from TB to win the boatman over. From there Billy leaves with the film company to be a star in Hollywood.

However, his plans and dreams come to naught. He does not die of consumption alone in some anonymous dive in Hollywood but returns to Innishman. The ending is ambiguous.  Billy learns that his parents didn't drown accidentally, but committed suicide so their insurance money would pay for his treatment in a big town hospital. We see him packing a sack with tins of beans and is just about to leave when the young girl appears. After much  teasing she agrees to walk out with him and as she leaves kisses him full on the lips. Billy leaves the sack full of tins of beans and does into the back of the shop.He coughs into his handkerchief and examines his spit.  In the last scene the two aunts are talking and it's not now clear whether the story of his parents suicide was just a tale; they have others they might tell him later on.

Was Billy leaving or was he going to drown himself weighed down by the cans of beans? Was he, in fact, suffering from TB. How would his date with the local girl fall out. We're left hanging.

The curtain call brought the Potterettes to their dainty feet as they clapped and shriek their approval. Daniel, who must have long got used to all this adoration, quietly bowed and acknowledged our applause.

It was one of the hottest evening of the year. Thank God the theatre was air conditioned.

Steve said…
Nice to know that young magician is treading the boards and becoming a proper actor luvvie.
10 July 2013 at 17:11

Marginalia said…
Dear Steve, yes he'll not be worrying where he'll find his next meal.

Dear Anon, yes I suppose that's right. But the ply's the thing.

Dear Bojo, he have difficulty getting it out.

Dear Sag, but I'm yold even New Zealand has culture. I mean there's Crowded House and The Vines...