The Hills Have Eyes 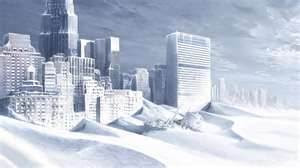 In the film "The Day After Tomorrow" two massive weather systems get stuck over the northern hemisphere, creating freak weather conditions across the US and Euro-Asia. Temperatures fall, planes drop out of the sky as their fuel freezes, people die instantly of cold when they leave their homes and Dennis Quaid is called upon to save the world.

The opening scene of "Blade Runner" gave us a dark grey cityscape in perpetual drizzle, the only relief being the cornucopia of exotic food stuffs on sale under brightly coloured umbrellas and canopies.

The dystopic vision of the future  is not science fiction. It is fact. Our little island kingdom, so lush and green, so full of summer days, clotted cream and strawberries, the thwack of leather on willow, of ice creams and cornets and pebble beaches, is stuck under a monumental lower pressure zone. As a result of the Jet Stream going all squiffy we find ourselves subject to, 24 hours a day, the re-enactment of the Biblical Flood, the Poseidon Adventure and  Moby Dick.

Feet are turning green with mould, hair is flattened across the brow, noses constantly drip and drains gurgle from acid (rain) indigestion. The mornings, when at this time of year, we'd joyfully greet the ascending sun and the chattering birds, are now replaced by slabs of damp grey flannel which drip incessantly from the lowering skies. So oppressive is the clime that on leaving one's house, one ducks down involuntarily for fear of grazing the sky. Eyes are permanently turned earthwards - partly because of the fear of drowning in some unsuspected puddle which formed during the previous night's down pour, partly because to look upwards is to see the unremitting clouds that stretch forever across the heavens - promising nothing but more depression, damp and drizzle.

Cars all spanking new and proudly polished now are abandoned as the muddy waters wash over the bonnets. Holiday homes, remembering happier days with family pets and aunts all bundled on the sun scorched green, bravely try to staunch the flood waters. To no avail. Seaside promenades, in summers past, full of chattering clerks, butcher boys and Woolworth girls enjoying a welcomed, airy bracing break from the smog and grim, now echo to nothing more than the incessant patter of raindrops on raindrops on empty tarmac. The bandstands sit like islands of despair, cut off from the rest of the town by a newly formed lake; stripy deckchairs float by as an ancient couple, this their 50th year on holiday by the sea, sit chattering as the rain laden wind, whips around their legs.

And in the background the illuminations are full on at mid day, only just breaking through the dimness, as we all wonder:

" I knew those atomic bombs were a bad thing. It can't be right blowing up the atmosphere. I blame the Russians and that Ivan Lendl. If it wasn't for him we'd be celebrating our first UK Wimbledon champion. All this genetic engineering - it can't be right: that's why the Eastern Europeans win everything - there's not one inch of them that's their own. And, well, what do you expect letting that Bob Diamond, an American, messing around with Libor, it's just not right, no wonder, my winter drawers won't dry. As for what passes as music these days, it's bad enough with this weather without being further depressed by that drivel. What was wrong with "Summer Holiday" and "Little White Bull", and why do the pictures have to be so rude, so violent, so boring. And what's all that 3D all about. It didn't work when I was a kid - stupid coloured glasses and the bloody film was in black and white. No wonder we're under a bloody big, black depression. It all went wrong after Churchill resigned. .. And don't get me on the health service!"
Email Post

Marginalia said…
Dear Steve, like your thought meander. Tommy Steele was in 'Alf A Sixpence' in the late '60's. He starred in "Tommy the Toreador", British musical that make "Summer Holiday" to be in the class of "West Side Story".