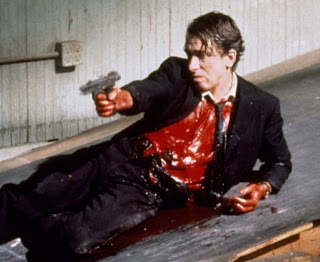 It's Easter Sunday and I'm looking out of the window onto the lilac trees which are beginning to blush, and then turn a deep - lilac. The colour reminds me of blood, which calls to mind the Psycho bathroom moment earlier in the week.

I had bought a tub of sea salt - as one does when one's a pretentious, precious little chef. I have an extremely pretentious salt bowl labelled "Course Sea Salt". My salt is not blasted from the deepest depths in the Carpathian Mountains. Mine is gently dried on the edge of the Dead Sea tended by goatherds and virgins. My pretentiousness was well and truly empty and I needed to get at that salt.

The container had a minuscule opening which allowed, at most, three small grains of salt to pass through; such is the nature of haute cuisine. Except I needed to empty the stuff into my exquisite salt bowl. That meant levering off the top.

First I tried a spoon, its edge was too thick and in any case silver bends too easily. Next, one of the dinner service knives. No luck, however, it wouldn't slip between the top of cardboard tube and the plastic cap. So I reached for a culinary knife: the sort fashioned by redundant samurai sword makers at the Nissan plant in Gateshead. With an extremely thin blade, which is extremely sharp.

I easily slipped the blade between the cardboard and the cap. With  just a little pressure, upwards and outwards, the cap would spring off and I would have an almost unlimited supply of the mystical crystals. Except...

The knife jumped out of the little groove I had made, went along the edge of the container, leaving a deep scar in its travels and continuing  sliced my first finger as neatly as an axe man's blade removing Charles I's head from his shoulders.

Blood, initially seeped slowly out of the wound. Once, however, it had my attention, it spouted like a fire hydrant on a scorching summer's day in the Bronx.

In my youth I had wanted to be a surgeon, except I can't stand the sight of blood. I react hysterically to the loss of my own precious life fluid. This time however, I manfully kept my senses and after immediately discounting the option of fainting, phoning the wife or an ambulance, I wrapped yards of kitchen towel around the mutilated appendage and rushed, muttering " Shit, Bugger, Fuck, Oh Bum", up the stairs and into the bathroom.

Over the bathroom sink I gingerly removed the kitchen towel,  releasing the pent up pressure of a capped Gulf of Mexico oil rig. Our bath room is white tiled. At the beginning of this week, it turned a whiter shade of pale along with yours truly."Stuck In The Middle With You" was echoing in my brain, along with "Red, Red Wine", as I feverishly searched for a plaster or ten.

The plasters you get in the packs from the chemists are not designed to cope with major trauma. The first two patches I tried to apply were washed away in a torrent of corpuscles. It was only after winding at least 6 metres of duck tape around the bloody wound that the loss of blood was staunched.

You would have thought I'd butchered a drove of pigs in the bathroom. Blood was everywhere.

Having stopped myself from bleeding to death, my heart rate returned to normal and I felt a rather superior Dr Kildare moment suffuse my being. "Oh Doctor, you were so masterful and manly", I day dreamed for a moment , before being brought back to reality by a large, spreading blob of red stuff on the bathroom floor which I'd overlooked.

After much cleaning up and whimpering. I went back downstairs into the kitchen and made myself a cup of tea.

The sea salt had taken on an interesting hue.
Email Post

Steve said…
Just had an email from Quentin Tarantino. He says can he buy the rights to this story for his next movie script (X certificate).
8 April 2012 at 19:11

Anonymous said…
Pleased you survived. Would have missed your wild ramblings.
8 April 2012 at 20:53

Lynne with an e said…
They sell pink salt. It costs more. You've saved yourself a bundle by colouring it yourself.
9 April 2012 at 01:44

Marginalia said…
Dear Louciao, a money saving tip, if slightly messy. But thanks all the same
9 April 2012 at 10:01