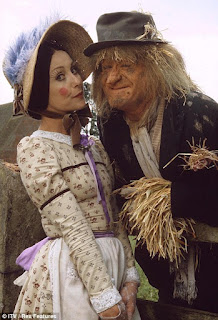 I take my responsibilities very seriously, setting off with pen and pad, keen to ensure that the wise words and advice from our head honchos are recorded accurately. I travel miles to attend these gatherings, along the byways and highways of Essex.

So it was with some pleasure that I set off yesterday morning on the 18 mile journey to the hamlet of Debden - that creation of post war planning designed to house the bombed out East Enders who didn't fancy Harlow or Billericay. To be honest Debden hasn't that much going for it - except some fine examples of local authority town and estate planning. It's main shopping area "The Broadway" is an unblemished 50's arcade - now denuded of any shops of character or interest. It's greatest claim to fame is, I suppose, being the home of paper currency, Clinton's Greeting Cards and acres of neat new showrooms displaying all that's brash in German auto manufacturing.

Off the Broadway and a few hundred yards down a nondescript road are the allotments. Arriving I was greeted by one of the plot holders who took me on a conducted tour of the site. He had three plots - given over mainly to potatoes. He had some beautiful purple sprouting broccoli, but bizarrely was unaware that the stuff was edible. He'd retired a year ago and swore the allotment was a life saver.

The communal hut, into which about 20 of us were crammed, was warm and snug. The meeting started at 10:30 but not before I grabbed a cup of tea and a slice of home made lemon curd cake (the cake maker was subsequently kidnapped and bundled off to a distant part of the county).

I love societies. They're run by ordinary bods, kept going with hot tea and cakes, and spend hours agonising over the most arcane issues. You often wonder how they survive, with the frequent outbreaks of internecine warfare that would have Borgia blanching. But they do: God Bless 'Em.

Most of us representatives are of a certain age, men with well scrubbed, happy, shiny faces. The women  reminded one of the mothers of kids you weren't allowed to play with 'cause they were "posh". There was a constant background noise to the meeting which took me a while to identify. Finally, I deciphered it; a combination of bodily functions and creaking arthritic joints, which accompanied the members as they offered up comments on the latest diktat from the Department of Local Government and Communities.

The subjects covered were varied and diverse. The theft of whole greenhouses and watering systems on one site caused much tutting and a general call for the return of capital punishment.

Plot holders who didn't look after their plots, didn't pay their rental on time and were generally bad eggs who you knew shouldn't have been given a plot in the first place, came in for much criticism. As did private landlords, builders, foxes, rats and all creatures great and small. Except slow worms who, it was agreed, were a jolly good thing to have on your allotment as they like slugs.

Seed potatoes: we spent quite a time talking about them. Did you know most of our seed potatoes come from Scotland? - it's the seed potato capital of the world. I bet no one's considered the implications of Scottish independence on the allotment holders of Britain.

Apparently we're getting ripped off, they're far too expensive although it has to be said that the main suppliers do offer a wonderful choice. Some 70 different varieties of spuds. I mean you have so many opportunities to plant them. There's your "Earlies", "Second Earlies", "Main", "Late" "Later" and "You've Missed the Post" varieties.

Bees: bees are very popular, but can be troublesome. The thing is people tend to believe that they are vindictive, malicious, cruel little bastards. When in fact they're mini teddy bears with wings.

If you want to have bees on your allotment you find yourself immediately bogged down by the Risk Assessment Industry, Health and Safety Conglomerates and your local Council's "Job's worth". However, get past that regulatory juggernaut and you should have increased crops, lush honey and neighbours who think you're a bit like Sarah Miles in her "Lady Caroline Lamb" period.

No, it was an extremely pleasant couple of hours spent with like minded people. The next meeting in July is in the depths of Essex. An excuse for a day out, a pub lunch and visiting a church or two.

The Sagittarian said…
Haha, as we can't live in our house now we have had to rent. The house we are renting has a 'garden' about the size of a shoe box...lucky then that The Stud can wander back to our own home and garden his socks off! I often tease him about hiding in is allotment!!
30 April 2012 at 09:24

Pickles said…
I hope you have studied our latest planning circular. You cannot, for example, convert a potato growing field into a turnip growing field without an impact assessment and planning permission.

Dear Sag, Shoe box, socks, teasing the stud. Where is this going...I hope not up the garden path.

I know that you'll feel better
When you send us in
Your letter an'
Tell us the name of your
Your favorite vege-table
1 May 2012 at 14:39