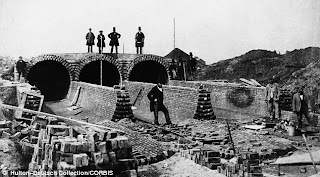 Beckton; there's not much you can say about the place. Good or bad. It's just there -  east of almost everywhere in London.

It's the last stop on one of the branches of the Dockland Light Railway (DLR); that Toytown sized railway that connects fantasy land (Canary Wharf et al) with the rest of the real world. Beckton is the destination of that illustrious Victorian construction established in 1864 as part of Joseph Bazalgette's scheme to remove sewage from London. The sewer which cuts across much of East London dumps its load (so to speak) at Beckton, just by the now disused artificial ski slopes opened by Princess Di in the distant 1980s when all of East London was to be regenerated.

The association of these two structures is unfortunate since it leaves an indelible image in my mind of a steaming heap of poo dominating the surrounding area.

It's not that Beckton ever really had a glorious past. It can claim to have been the home of the largest coal  gas plant in Europe; but that closed when we all switched to North Sea gas. It did have docks but when containerisation took hold, Beckton lost out.

The University of East London campus sits forlornly next to the DLR rail track and on a clear day one can see London City Airport, built to whisk all the high rollers from Canary Wharf to their skiing chalets in Val de Sere.

Not a place to visit, even on a bright sunny day. I went there yesterday when London found itself at risk of being flushed comprehensively down the Thames.

The genesis of my day trip to Beckton was an order on Amazon. Two orders in fact. One, the DVD of the second part of Harry Potter and the Deathly Hallows and the other, a discounted 100 ml of l'eau de toilette pour moi.

Amazon helpfully told me that the DVD would arrive on the 29th of Dec and the smells a day later. The DVD arrived on time thanks to the tenacity of our local postman who managed to stuff a largish parcel into a smallish letter box. There was no sign of the smellies on the due date.

Initially I thought they'd just been delayed. City Link,the couriers,may have been extra busy. Anyway I thought I'd check on line: track the progress of my small packet. To my surprise I was being told that they'd tried to deliver on the correct day, left a "We called but unfortunately we got no reply" card and I could collect it from their depot - in friggin' Beckton.

I was tempted to write a stinking letter of complaint since no card dropped thro' my letter box, but after the enforced confinement keeping an eye on tail-less Ginja I thought a trip to the wilds of the Thames estuary would do me good.

I decided to go yesterday. I couldn't go on Wednesday as I was playing squash and City Link's helpful website informed me that if I didn't turn up to collect said package by Thursday it would be sent back from whence it came.

The missus suggested I delayed the journey as the weather was about to turn 'orrid. But, no I could cope. I wouldn't take the car for fear of getting lost but instead planned to use the good old London transport system - well what was it there for but for someone like me to go to a place like Beckton. In addition my "Freedom Pass" allowed me free travel to such far off places as Beckton sur la Thames.

From the four alternate routes offered by Transport for London website I chose the tube/train/DLR option rather than the two walk/bus/walk/bus and walk/train/walk/bus alternatives.

Setting off optimistically from Walthamstow Central underground station I alighted a few minutes later at Tottenham Hale, and onto the rail platform to catch the train to Statford International. In the five minutes before the train arrived the heavens opened and I feared for my life. They say drowning is the worse death, and I and the few people on the platform faced a watery end.

Luckily the train swept in, on the crest of a wave, and we managed to get to Stratford sodden but alive. A moment of indecision held me back as I glimpse the cathedral of consumerism that is the Westfield shopping extravaganza: from the outside it looks like a huge concrete block. No, I thought, on with my mission, I'll pop in on the way back.

A short wait for the dinky DLR train and I was on my way slowly to Beckton. The DLR makes up for its lack of miles in the frequency of stations which remind me mostly of badly constructed IKEA flat-packs. On the toy train rattled, stopping gingerly as such evocative place names as "Royal Victoria", "Custom House",  Prince Regent", "Royal Albert", Cyprus" and "Gallions Reach"before turning up at Beckton. It was depressing passing through those stations stuck out in the wilderness, reminders of a glorious Imperial past.

My smartphone had located both me and my destination, which was part of an anonymous "business park". I struck out, in the pouring rain, only to retrace my steps after a few minutes when I realised I was going in the wrong direction.

Did I mention that Beckton is the courier depot capital of the UK? I traipsed past acres and acres of Fed Express, UPS, Wells Fargo, UK Mail logo bedecked lorries parked up - no doubt full of undelivered Amazon packages. Finally I arrived at the most depressing of "customer service" areas, at the worse end of what was a pretty awful block. My expectations were confounded when I was addressed by the most civil and likable young man who on checking my passport and driving licence went off to fetch my parcel. A signature and a farewell and I and my l'eau de toilette hurried back to Beckton station as the clouds cleared and blue skies were glimpsed in the distance.

The journey back was uneventful save for my stop off at Westfield and the 3, or is it 4? storeys of shops and eateries. I headed straight for John Lewis, passing at least 6 mobile phone concessions on the way. Except the John Lewis there is like any other anywhere else. Seen one, you've seen the lot. The same with M&S. There are only so many Apple iPads you need, or pairs of shoes you can wear, or mobile phones you can carry. Westfield was the same goods and services repeated ad infinitum. The promise of choice is an illusion, it's just an indigestible pile of stuff. And crowds were rushing hither and thither going from one sameness to the next. I left after 15 minutes so as to retain my sanity.

After Westfield, Beckton was beautiful by comparison.

Steve said…
How can Beckton be the courier capital when you had to go there yourself to pick up your parcel? It sounds like Beckton is just one big post office...
4 January 2012 at 19:39

Marginalia said…
Dear Postie Steve, technically you may be right but since I didn't see one post office in Beckton and loads of courier lorries I'll stick by my description.
5 January 2012 at 10:06

Marginalia said…
Dear Anon, I feel I know you.

Yes thank you a nice little number called "L'Homme Sport" by Lanvin. Very fresh, quite young for me, in a lovely bottle blue glass bottle. I do think the containers are o important, don't you?

It looks extremely pretty on the bathroom shelf shoulder to shoulder with the other perfumes.
5 January 2012 at 10:52