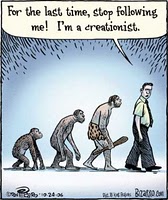 It is beyond  dispute that Richard Dawkins, great thinker, author and general good egg,  is what evolution is all about. Evolution got going  billions and millions of years ago so that today its crowning creation, Prof Dawkins, could speak to us about the folly of Creationism and Intelligent Design.

(At this point I must own up to a slight confusion on my part. I often get Stephen Hawkin (big on time and black holes), and evolution's greatest triumph confused. It's easy to do. Both have big brains, both talk a lot of sense and both have been on Noel's House Party ( I think)).

Having got that out of the way, I have to say that I am greatly disturbed by reports in the press that Prof Dawkins is calling for a ban on the teaching as science crack pot ideas on the origins of life .

I think he's being a real kill joy. Why can't our American cousins be taught that dinosaurs were washed away by the Great Flood or that the earth was created on Thanksgiving Day out of the belly of an enormous turkey?

If it's in the bible then it must be true, right? And if that's the case then what the bible is is facts and facts are science; so Job, Sodom and Gomorrah, Shadrach, Meshach, and Abednego are equally welcome in the science lab along with the Bunsen burner, smelly chemicals and sniggering in the back row when "Miss" mentions reproduction.

Leave Creationists and Intelligent Designers alone I say. They may be misguided but we all should be allowed one big mistake - we've the Coalition.

I mean if you were God would you create such an annoying little know it all who takes every opportunity to doubt your existence, and undermine the hard earned faith of millions of your followers?

Mr Blobby said…
Agree. Dawkins is as rigid and as dogmatic as the creationists which he criticises.

Steve said…
I feel ambivalent towards both Dawkins and religion. Or indeed anyone that professes to know the Truth and have the answers to everything. I'll stick to my motto of "to each his own".
20 September 2011 at 22:26