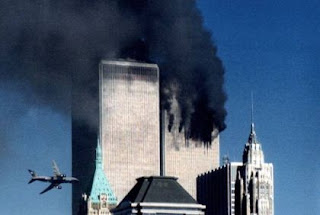 It's difficult not to sound disrespectful or lacking empathy or concern, if I say I hate this 10th anniversary binge.

9/11 was a private tragedy for nearly 3000 families, it was a public disaster for America and much of the Muslim world.

Let those families remember, mourn and continue to grieve in private - through no fault of their own loved ones were snatched away in a most terrifying manner. Let us pray that most have been able to move on, and that their scars have not left them too badly damaged.

Hearing their stories, their anger, grief and, in some cases, continuing hopelessness is not something I care to do, even at 10 yearly intervals.

If we must remember publicly that moment of stunning high drama and incomprehension, let us also remember what it lead America into. 10 years of wasted effort, 10 years focused not on healing, but of bleeding  Iraq and Afghanistan  dry. 10 years  when the greatest power on earth, occupied overseas lands, but lost its own home land.

Remember that America's response did nothing to redeem those thousands of lives lost. Remember that its own response was, in many ways, driven by an ideology and belief as distorted and blind as that of those who flew the planes into the Twin Towers, the Pentagon and a field in Pennsylvania.

America has paid a frightful price for its revenge. Let's hope they and us remember that.

Steve said…
For me it's the ten year anniversary of when the West decided not to take a look at itself and see why the rest of the world thought it an enemy but decided to plough on, undeterred, creating the same environments which triggered the tragedy in the first place...
11 September 2011 at 18:12

Anonymous said…
Since we've been blog buds for awhile now, I'm gonna say this with as much respect as I can.

As an American I found this post extremely insulting. We grieve every year publically as a nation-together-united. Every year we gather at the sites and read the names and remember those lost. This year just happened to be 10 - and the media coverage was worldwide. Most of the films made have donated the money to the 9/11 Victims funds. We grieve together as Americans to remind ourselves of the lives lost to terrorism.

As for this comment "10 years of wasted effort, 10 years focused not on healing, but of bleeding Iraq and Afghanistan dry. 10 years when the greatest power on earth, occupied overseas lands, but lost its own home land." You couldn't be more wrong - your not an American so how can you determine what's been wasted, you don't live in this country. Bleed Iraq and Afghanistant dry ??? I have no words.... AND WE HAVE NEVER LOST OUR HOME LAND. EVER. Bin Laden is gone - but oppression and terrorism live on - not because of Americans but because of people who can't stand our democracy and sense of freedom.

I honestly hope that no one who has lost a loved one on that tragic day reads this post. I know it's your opinion on the matter, and you certainly are entitled to you opinion on your own blog, but since your not an American and you have most likely never been to the ground zero site, and felt the loss in your heart - you really got it wrong.

Marginalia said…
Dear Scarlett, what can I say?

I believe that the chain of events after 9/11 could and should have been different. Instead of being detracted by Iraq America's leaders should have focussed on Bin Laden.

Instead thousands of blameless civilians in Iraq died either as a direct result of the invasion or as a result of the total chaos left by the allied forces.

Anonymous said…
I don't think the act of War honors those lost either, nor do the innocent deaths of 3,000 people honor the fallen solider who fought to continue our ways of democracy and freedom. And we are not alone in that fight. America is not the only nation fighting, it may have started here, but it touched your home land also.

I just wanted to shed a little light as an American - why we remember 9/11 so pubically. Sure it makes everyone feel raw, sure I cried everytime I turned on my TV yesterday. Sure I will return to the site now that the memorial is complete to pay my respects. I do this not because I personally knew anyone who perished or I want to exploit myself, I do this because we are a united people, it's instilled in your brain since birth and it gives others comfort to see complete strangers grieve, pray, and pay their respects to thier loved ones. People want their family and friends remembered, because they were so tragically and unexpectedly taken away that day - it's the least we can do for such a sacrafice, And I refer to the passengers of Flight 93 when I use the term sacrafice.

I hope I haven't offended you. It's been a long time since I felt compelled to challange someone else's opinion.
12 September 2011 at 19:45

Marginalia said…
Dear Scarlett, no offence taken. I do not belittle the events of 9th September 2001 and those 3000 who died.

I hope that America regains it sense of purpose - for I believe it has lost its way. Not through overseas adventures but in renewing itself in its shattered industrial heartland, in its sense that the sky's the limit. I feel that the US is tired, weary and wary. I'd like to see the America I visited in 1976 return!
12 September 2011 at 21:01

Anonymous said…
It so refreshing having a debate with an intelligent person :)
13 September 2011 at 19:15