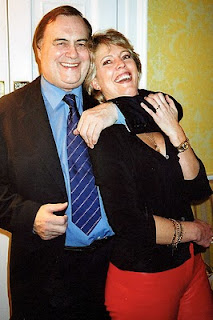 Having been ennobled as Lord Pressy of the Left Hook, he sits quietly on Labour's benches in the Upper House. Now only occasionally does he venture forth onto the airways - huffing and puffing like a bad tempered bull on heat.

Gone are the days when the BBC's "The Today Programme" employed a squadron of linguists to make some sense of his exchanges with John Humphrys. No more do we witness battle scarred parliamentarians sitting open mouthed as Hull's answer to Bessie Braddock mangled the English language in explaining (sic) his latest scheme to turn the Thames Gateway into London's overspill.

All that is in the past. Only occasionally do we witness the faint echoes of Labour's own "Big Bang". Today was such a blessed day.

It turns out that another of Pressy's big schemes has gone spectacularly arse over tit.

It was such a sensible idea, replace 46 local fire control centres with 9 regional massive centres, equipped with all the latest gizmos, wifi, Starbucks franchises and a few fire engines. Not bad for £72 million. Except, as night follows day, when dealing with over blown, grandiose Ministerial ego trips, the thing spiralled out of control.

According to Parliament's Public Accounts Committee Report, there was never any control of the project, no accountability, no one in charge (except the consultants, who walked away with £69 million in fees).  After £500 million having been spent the project was cancelled.

Dear John was the minister in charge. As he said on the radio this morning "I'm prepared to take responsibility". although he didn't quite say for what. And immediately followed that up by saying he couldn't be blamed if civil servants didn't tell him what was going on.  That's, of course, why we have Ministers - so they can be kept in the dark by their civil servants.

This Big Beast has gone the way of the dinosaurs, the victim of (political) climate change. Thank God.
Email Post

Prezza said…
Those toffee nosed civil servants ran rings around me on this project. They thought they are clever with their PPEs and the like and could bedazzle me with their delivery plans and risk registers. Well they succeeded. And I am not letting them bloody off! Next time I am in office I will be ready for them.

Steve said…
£69 million in fees?!? Christ. I need to get me some of this consulting malarky. I'm happy to be consulted about anything. Anything at all. Honest.

Prezza said…
Marginalia? Is that some Latin in joke. Very elitist that. Up in Hull we talk in plain English. We like to call a spade a shovel.