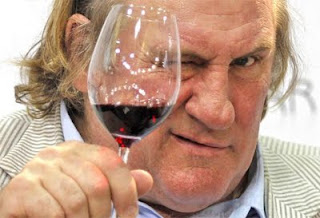 Who can forget that scene in "Jean De Florette", when our eponymous hero is laid out on the kitchen table having over egged the dynamite and ended up at the bottom of the well.

It is a heart of stone that is unmoved during the piteous scene as "Cyrano de Bergerac" lies dying (having been hit on the head!) and Roxanne by his side. Only when he dies does she realise that it was him she had always loved.

Were you not so conflicted when "Martin Guerre" is mistaken by another's wife to be her husband. Didn't you sense the chill of foreboding as Martin convinces almost everyone in the village that he is the returned husband.

Don't you clap with glee at the news that Gerard Depardieu pissed into a bottle, when he was not allowed to use the loo as the plane he was on was about to take off.

The actions of a true hero, something his film character Asterix would have done, except he'd have pissed over the Romans. Something you'd expect from one of France's greatest actors and a Chevalier of the Légion d'honneur, and Chevalier of the Ordre national du Mérite.

Gerard for Prime Minister, President and Leader of the Opposition! Take that Cameron, Obama and Miliband.

Wimps out, hard drinking, womanising. piss taking Frenchmen in to set our lost youth an example to follow!

Steve said…
Funny how when I first heard this story it was just reported as "Gerard Depardieu urinates in aisle of plain".

That bottle makes all the difference and I am admiring of anyone who does not have a shy bladder.
21 August 2011 at 15:08