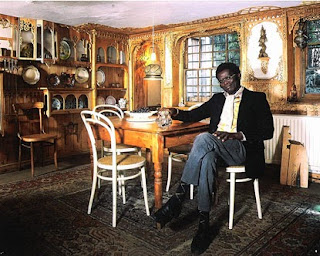 I think I may have mentioned that much of my working life was spent in the airy offices of Her Majesty's Treasury on the corner of Parliament Square and Whitehall.

It is a splendid piece of Edwardian grandeur. Long high corridors with large doors leading into large rooms accommodating an army of civil servants.

In plan the building's shaped like a rectangle with a great hole in the centre and a series of light wells build into the building around the central circle.

Where your room was situated, to some extent, determined the importance of the work you did. Ministers' rooms were and still are on the second floor; the most senior suites of Ministerial rooms were on and looked onto the central  circle. Other Ministerial offices and those of their staff overlooked Whitehall. Because Ministers were on the second floor most of the senior civil servants were there also, with large rooms, large tables and ancient pictures from the Government's art collection placed on the walls.

Entering the building through the  massive doors giving onto Whitehall, a visitor would be at once impressed and disappointed. Chequered tiled floors, a grand stone staircase leading to the second floor gave the visitor a sense of sobriety, seriousness and industriousness. Unfortunately, the episodes of terrorist attacks in the 1970's and the prospect of other bombing outrages in more recent times meant that the windows were hung with blast curtains, which were dirty, bedraggled and light absorbing.

Many important and famous people have worked in the building. Churchill, Chamberlain, Asquith, Healey, Lawson, Major and more recently Brown and Osborne. John Maynard Keynes worked there during the First World War and during part of the Second World War so did Iris Murdoch. From the ranks of the Treasury's civil servants are drawn the Permanent Secretaries of the great Departments of State; and the Head of the Civil Service and Cabinet Secretary is invariably a "Treasury man".

The building has witnessed many famous, and not so famous events. Churchill appeared to the crowds on Whitehall from one of its windows. I recall an ashen faced Norman Lamont having to announce the capitulation of the pound to the foreign currency speculators on Black Wednesday, 16th September 1992, when the UK was unceremoniously dumped out of the European Exchange Rate Mechanism.

It was therefore with a sense of irony that I found myself attending the second meeting of the Treasury's newly formed Historical Society. The talk was not about one of the great and the good that litter HMT's past. Instead we were there to hear about a low ranking  civil servant who worked there for about 8 years.

I knew Khadambi ('Nat') Asalache in the early 1980's in the Treasury. He was a tall, jet back Kenyan with a singing voice and ready laughter. Nat and I would stand and pass the day chatting away in the corridors. I can't remember what we talked about.


Nat died in 2006 and left his remarkable home to the National Trust.

On the outside it is a Grade 2 listed property built in 1819. It's a "two up,two down" on a busy London road next to what was a laundry. Inside it is a testament to the beauty of the human mind and spirit. It is an affirmation of life, exuberance and boundless possibilities. It is, in short, unique: so worthy of attention that it is to be preserved for the nation.

The lecture took us through what is known of Nat's life (in Africa, Italy, Switzerland and here). His architectural training,  his poetry, his stories, his screenplays, his M Phil at Birkbeck College, his membership of the Colony Club, his fabled dinner parties and idiosyncratic writing style at work - Treasury reports would be in blank verse.

A man of the world, who carried his world with him.

After the talk, the three of us who knew Nat chatted with the National Trust curator and were able to fill in some of the details of his work in the Treasury. The main memory appears to have been of long lunch time sessions at his house (this was the early 1980's), comprising of wine and fabulous food.

It was a great day. As well as the lecture, I met up with old work colleagues I last saw 9 years ago, walked around a great building remembering over 20 years of working with brilliant people, dealing with really difficult, absorbing issues, and afterwards visiting a decent wine bar just around the corner to share a great bottle of New Zealand Pinot Noir.

You can donate to the preservation programme at http://tiny.cc/d8c6e.