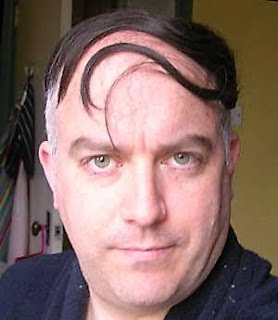 Hair grows on you. Everywhere. As you get older in many men it stops growing in the usual places and begins to sprout in unusual and awkward areas. Hence the numerous ads at the back of the Daily Mail for nasal hair trimmers which also remove unwanted ear hair.

Eye brows come into their own after a certain  age in some men; taking on a quasi - autonomous existence, floating leisurely just above the eyes.

I had an Uncle Mac whose eyebrows were as thick as his Glaswegian accent. But they weren't only bushy they streamed behind him as a vapour trail or peacock's plumage. He was famous for his eyebrows and his broad smile exposing a perfectly white and even set of national health nashers; replacing the teeth he lost at about the same time as he lost his hair. He had lost his head hair very early on - he blamed my aunt and her four sisters for his alopecia - it went quite suddenly during their courtship. The incessant teasing by her sisters - his broad Scottish accent contrasting with their Oxfordshire dialect - was, he claimed, the reason his hair fell out only weeks before his wedding.

His eyebrows seemingly aware of the lack of hair above them and no doubt feeling rather exposed decided that, rather than act demurely, they'd take centre stage. They became his semaphore. He had no need of speech since his eyebrows conveyed all meaning. Affection, by gently quivering, surprise, by taking flight and apparently detaching themselves from his upper visage; anger; clenched together tightly to run unbroken across his brow. He was once employed to sign for the deaf!

It was rumoured that he spent a whole week attached  to a wire-haired terrier; he having got rather too close to the beast and his eyebrows meshing seamlessly with the mutt's own wiry hair. He refused to have his eye brows shaved and so spent seven days getting  up close and personal to an increasingly distracted canine.

All this, whilst interesting and possibly somewhat fanciful, is not the main purpose of this post. No, my intention is to draw the world's attention to the phenomenon known as "A Good Hair Day".

This is when, after washing and coiffuring one's barnet, it is in a state of near perfection. Every hair is the proper length, with the right bounce, lift and curl. The sheen is neither too garish nor too dull and the texture is as you always wished it to be. One can do little else but stare in wonderment at the miracle reflected in the mirror.

On that blessed day, with that head of hair you know you are "numero uno". Frankly, you could walk naked into the office and all eyes would be on the bonce; unless of course you were staggeringly well endowed in the "meat and two veg" department.

Unfortunately this state beatitude lasts just one day. The next morning, no matter how much care and attention is lavished on the old noggin, the barnet looks a mess.

Leaving me to wonder whether my uncle was far better off in his extreme baldness. I'm certain that for him, after a quick rub over with goose fat and a  good buff up, he was happy to be Hairless in Glasgae.
Email Post
Labels: hair