Get Your Kicks on Route 66 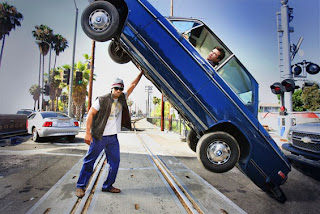 What is a car for? You might think a simple enough question to answer.

It's for saving children's delicate feet from the wear and tear of walking a couple of hundred yards to the school gate;

It's for getting value out of the vacuum cleaner as you spend a quiet Sunday hoovering down the car's interior in a vain attempt to remove the dog's hairs and smell;

It's for giving yourself a hernia as you attempt to load that extra value, extra large sack of potatoes into the ergonomically designed (for a dwarf) boot;

It's for maintaining your bank manager's lavish life style as the car fills up with fuel and your bank balance dips below empty;

It's for those delightful trips into the country wide traffic jams;

It's for stopping at motorway service stations so that you can spend what was to be your holiday money feeding you and the kids on a packet of crisps and a drink;

It most definitely is not for filling a hole in a row of parked cars outside your house.

It's slowly crept up on me; and it's starting to worry.

I'll reach out for the car keys, make to open the front door and cross the road to where the car is parked and then I stop and think: "If I drive off in the car, by the time I get back the space will be gone." In that instance in my mind's eye there rears up a vision of a dirty great big black Merc, with blacked out druggy windows and spinning alloys taking "MySpace" and sitting there daring me to claim it back.

So I don't. I retrace my steps, close the front door, put the keys back in the pot and gain immense satisfaction knowing that my car's parked just across the road should I need it.

Instead, since I won't be driving it, I wash and polish it. Taking enormous effort to ensure that the paint work is so shiny passers-by can view their images undistorted in the side doors and windows.  Now not only do I have my car in "MySpace" it's the shiniest, least worn out car in the row of cars in our street.

You want to know how I can make a tank of diesel last 3 months? - that's how. I'm thinking of sending daily photos of my stationary, parked car to the insurance company to convince them that the current premium I pay is out of all proportion to the occasions the car finds itself propelled along the highways and byways of our great country.

Today, I was forced to move the vehicle; the missus needed to go to Costco to get birdseed, dog food and 12 months supply of loo paper.

After a incident free trip to and from the baseball stadium that is Costco, I arrived back home to find "MySpace" taken. Since it was a penny to a pound that the nearest parking space was at least three streets away we unloaded directly outside our house.

This can be a perilous task. Unloading the car from such a position should really be a four man operation. Two, in the road, looking  up and down its length to ensure the early sighting of a traffic warden, mobile CCTV traffic enforcement vehicle or an irate car owner wishing to drive up the now blocked (by my car) road. The driver, alert to the warning signal, engine already revving so that a quick escape is possible. The strongest of the four is entrusted with lobbing the purchases from the boot of the car  into the front garden.

Today, there was just me and the missus. I had planned to stay in the car should the need arise to speed away at the slightest hint of danger or a £60 fine (reduced to £40, if paid within 2 weeks). However, given the bulk of the bog rolls and other essentials I helped my Valentine to unload the car. At which point some poor bastard came up behind in an old banger.

This called for the usual "helpless homeowner trying desperately to unload the Saturday shop, when there's no where to park" routine. I simultaneously gestured to the house, the car boot and the space less row of cars opposite. At the same time I gave a helpless shrug of the shoulders, smiled inanely and mouthed "Sorry, no where to park, won't be a mo. Thanks for your patience and forbearance."

It seemed to work. The driver sat quietly in his car. (On occasion drivers have been known to get unquietly out of their cars). No loud horn, no profanities or vain attempts to turn round and go back (illegally) the way he came.

After what seemed an age the car was empty and I was able to drive off, waving gaily to the patient driver,  to find a parking space within commuting distance of our house.

This now presents another difficulty for this car owner. There is a risk, if I don't use the car again for a while, that I'll forget where it's parked. To forestall such an eventuality I will spend the rest of the day twitching the net curtains on the look out for a car space to appear in the row of cars opposite.

Should that happen a mad dash to the car and a drive round the block will ensue, in the hope of filling the space before some other poor orphaned neighbour does!
Email Post
Labels: car clamping cars shopping

Steve said…
You need two cars. One to have in transit. The other to keep parked outside your house.

Or just steal a load of traffic cones to fence off your space when you drive off elsewhere.

Or buy a machine gun and a watch tower.

Marginalia said…
I thought of getting the missus to lie down in "MySpace" when I take the car out for a run. Except a neighbour's tried it. The funeral was last month: his wife was crushed by an Ocado delivering to a neighbour.

The Sagittarian said…
When I visited the Uk a few years ago I was astounded at the lack of off street parking, something we clearly take for granted over here where we just zoom up the drive to our house! I think some areas in the inner city have parking certificates specifically so they can park outside their own property if they need to but the musical-cars you play sounds awful! Maybe you should paint "No Parking" signs on the road right outside your house and paint your car in camoflage....
14 February 2011 at 20:37

Marginalia said…
We pay £40 odd a year for a parking permit - if you don't have one you get fine and towed away. It doesn't mean you have a right to aprk outside your house; you just don't get fined if you managed to.

It's a function of London housing. Most of the houses were built before cars so there's no garages. Also very few people had their own transport then. So we park on the street, but there are more cars than space to park.