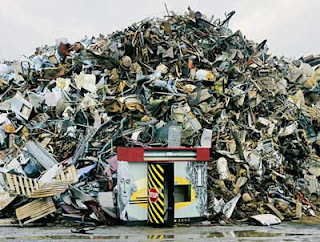 This, if you didn't know, is the title of a 1973 Roxy Music album. It is also the title of their current zimmer frame tour which I had the misfortune to attend last night.

What was wrong with it? You've got an hour or two?

First, the venue. The O2 in Greenwich, London. It is a huge canvas stretched over tack. There is nothing likeable about the place. From its garish neon, its expensive, cheap eateries, its hideous exhibitions and its inflated sense of self importance, it reeks of exploitation over pleasure.

And the O2 Arena - which proclaims proudly that it's the greatest music venue in the world. My arse.

It is simply an up turned wok with as many seats as possible stuffed in so that the greedy bastards can coin it.  In the "greatest music venue in the world" a glass of beer will cost you nearly £5 -and there's no choice 'cause Beck's - proud to be a partner - have it sown up. Food - crap fish and chips both prepared from the same block of cardboard and deep fried in cellulite cost almost a tenner. On the High Street these people would be closed down.

The souvenir programme for the concert was £15! Having taken £60 from me for one ticket they must of thought that we were all lambs for the fleecing.

There is a real danger in seeing a concert of your rock heroes of 40 years ago.

Two, the collection of over weight egos that masqueraded as Roxy Music. My grandmother, bless her, has been in her grave for some 50 years. She's more alive than that group of dick heads ever were last night.

In the middle of the arena was the control centre which tried manfully to turn the belchings of a group of dyspeptic pensioners into something approaching a sound the human ear could tolerate. There were at least three electronic wizards to each of the group members; and still the contest was too much for them.

Three. I know Brian Ferry went to art school with Leonardo DiVinci, but what right does that give him to subject us all to a whole hour and a half of technicoloured  pseudo 60's nonsense; broken only by bleached out close ups of Ferry's pimply nose.

Frankly I was worried for the health of the audience - most of whom, like me and my mate Peter can now only look forward to elasticated trousers and wet stains. Half an hour into the "gig", waves of elderly men with large stomachs and red faces, from the exertion of fighting gravity to climb the steps to the loos, would trundle by. This stream of bodies continued throughout the performance. Matched, apparently, by Ferry's own regular dashes off stage. One wonders what the other rock pensioners did. One suspects, attachments of plastic pipes and disused Beck's beer bottles took away their discharges.

I could go on. About the complete lack of engagement with the audience. Ferry spoke only twice during the one and half hour performance; to introduce the band and once to ask where the defibrillator was.

The O2 is at the arse-end of London anyway. The only comfort to me is that it so succinctly and perfectly  sums up Tony Blair's years in office. From a distance it looks impressive. Close up it's an absolute mess.

Thanks Roxy Music, I spent £60, and a few hours of my depleted years, to have my music trashed. Thanks a million.
Email Post
Labels: O2 Roxy Music wankers

The Sagittarian said…
That would rally annoy me, having spent all that dosh and invested your time to go...these 'superannuation tours' are hit and miss eh!
9 February 2011 at 00:07