In the Land of the Pig, the Butcher is King 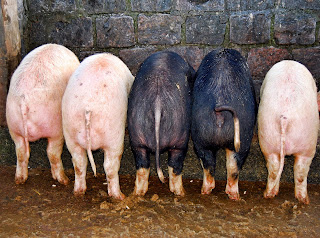 I have to tell you that the roasted pork belly I did the other day was stunning. As I mentioned earlier I'd some pork belly left over from my excursions into pork pie making. That, along with some chopped shoulder of pork, needed to be used up.

You either love or loathe Nigel Slater. He's certainly everywhere these days and he's one of the increasing number of middle class, clever amateur cooks who populate our media. His food is cut down, friendly and is aimed at an audience that has money to splash out on quality ingredients. He's the ascetic, a cut price, version of Nigella Lawson  inhabiting the same world of tidy gardens, large fridges and expensive German cookers.

I love his no nonsense cooking. If you've watched his "Simple Suppers" on TV you'll know what I mean. His kitchen is cool, his style controlled and collected yet creative. It's an environment in which cooking is not necessarily fun, rather an exercise in precision and preciseness. That in itself can be very satisfying and I find it extremely attractive. It is that that I love.


What I find less appealing is his cod philosophy.To quote:

"There is something quietly civilizing about sharing a meal with other people. The simple act of making someone something to eat, even a bowl of soup or a loaf of bread, has a many-layered meaning. It suggests an act of protection and caring, of generosity and intimacy. It is in itself a sign of respect."

Just get on with the cooking Nigel and leave the blue passages to Barbara Cartland!

But back to the pork belly. As you may recall Nigel's recipe called for groundnut oil and Chinese five-spice powder, for which I substituted olive oil, Japanese rice vinegar, freshly ground ginger, fennel and smoked paprika. I marinaded the pork belly and shoulder of pork in the concoction for over a day. Whilst the cats' chicken was roasting, my pork belly was bubbling way.

Stunning, there's no other word for  the taste experience. The meat was sweet, succulent and with a dash of excitement courtesy of the spices. Except it was hellishly fatty. I suspect my portion was the equivalent of 3 Mega Macs and fries. And that's the problem. What gives meat it's flavour is the fat. For that matter what gives roast potatoes their unctuousness is the spitting hot goose fat larded over them.


I don't know for how long we've been deprived of saturated fats. Beef marbled with yellowing fat, sausages made with pork fat and meat conjoined in a perfect marriage - consigned to the history books if many had their way. Puddings: what we buy now are perversions. Steak and kidney pudding is nothing without suet. You might try a vegetable substitute, in the same way you might substitute Donny Osmond for Elvis.

Which brings me back to Nigel and our apparently insatiable appetite for vicarious cooking. We appear to be so scared of letting anything that might be fun pass our lips we have to experience the forbidden through a TV screen. Except we're quite happy to buy convenience foods, eat burgers and buns ladened with trans fats as long as the label gives us some medico babble and and a reassuring word about its sourcing.

Sorry, you want to know how my pie turned out. That's the trouble it didn't. It was so packed with meat that I couldn't get it out of the mould. Also having far too much meat meant that the jelly couldn't get in. So the pie was not a Melton Mowbray at all. The pastry was excellent, and the meat itself was well cooked and tasty but wasn't surrounded by the jelly I'd taken so long to prepare.

The jelly freezes so I can try again and the next time I'll go easy on the meat and I'll make a real raised pie.

Here's to my next by-pass.

The Sagittarian said…
Love the sound of that pork belly. I know what you mean about marbled meat etc, really gives a great flavour. Maybe you need a fix of good ol' NZ beef - Silver Fern Farms export to the UK, keep an eye out for it. Delicious.
25 January 2011 at 10:20