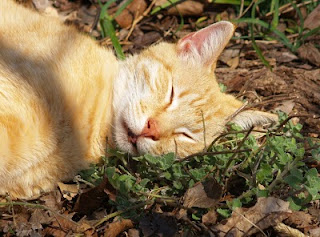 Our house is like Manchester's "Hacienda" on New Year's Eve in 1991. The cats have found the cat nip!!!

It's my wife's fault of course. She bought an especially pure packet of the stuff from a pusher at our local vet. We'd only gone for a flu jab and  de-worming; but Lesley was suckered in by the plausibility of the pusher masquerading as a caring veterinary assistant.

I didn't feel very comfortable about it, but went along with the hit because Lesley said it was ok. Little did I know that cat nip is a class C drug.

We found out how deadly the stuff was when Lesley waved a handful under the nose of the unsuspecting Woo who she was cat sitting for a neighbour of ours. I knew something was up when she hadn't returned after an hour. Normally she'll be with Woo for 15 to 20 minutes -  for just a chat, game, stroke and feed. My worse fears were confirmed when she staggered through the front door glassy eyed. Woo had become  a smack cat. After less than a week he was flopping here, flopping there, spinning around on his back purring and in a trance. It was a really heavy scene.

The RSPCA raided our neighbour's house twice following complaints and Woo was held in custody at the local cattery until his owners returned. You can imagine how they felt. It took a fairly hefty donation to spring Woo and for a couple of weeks it was touch and go whether he'd go off the rails. Luckily Lesley's banning order meant that she couldn't get within a cat's whisker of Woo and all the signs are that he's been wooed off the stuff. He's still a bit shaky but at Christmas he ate cold turkey and seemed none the worse.

After all that you'd have thought Lesley would have flushed the remaining dope down the loo but no. The next thing I know Tom and Sherry are behaving like a couple of teenagers at a rave - they're in their late 70's. They sniffed the stuff and couldn't get enough of it. Next it was Ginja the Ninja - totally freaked out. We had to bring him down gently with a saucerful of cream and double helpings of Go Cat biscuits.

However, it's Sylvester I feel sorry for. I told Lesley to be careful, but would she listen, does she ever. What we didn't know was that he was ex cat nip junkie and had successfully kicked the habit. He didn't stand a chance poor mite! Once Lesley had laid down a line of the stuff he was lost. We left him wrapping himself in his blanket trying to chase what we can only think are imaginary psychedelic mice. It was a pitiful sight.

We're not sure but we think we'll have to register him as a user. That's one of the conditions of getting psychiatric help from Katscape   - the charity dedicated to weaning pussies off this deadly drug. We can but hope!

I feel really bad. I mean they're not bad cats, they just got in with the wrong crowd: my wife. She just doesn't see what the problem is. In fact she's booked a DJ for a cat rave here next Saturday night. I'll be down at the local pub.
Email Post
Labels: cats

The Sagittarian said…
Oh that stuff is evil, it even reduced our Ermie to a blithering mess. Get out while you still can...
9 January 2011 at 19:18