This time (we'll get it right) 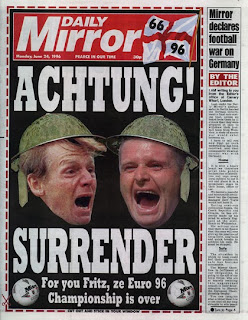 There are some things in life that are just a total waste of space. I don't say that lightly..what may be seen by me as a huge blob of nothingness may be something of immeasurable worth to some other poor sucker.

Organised sport - that is sport organised on an international level is high on my list of things the world would be better off without. Why, oh why do we get our football shorts in a twist over who is chosen by a cabal of self serving geriatrics to host the Football World Cup? What, in heaven's name, persuades any country that hosting the Olympics is an honour? Or for that matter to build monsterous racing tracks so that young men in fast cars can go round and round and round,  stopping to fill up with petrol and change tyres every now and then? Why?

I, of course, exclude the noble and ancient game of cricket from this league of uselessness. Especially when for once in a very long time we have the perfidious Australians well and truly by their googlies. Saints Alastair and Kevin have put the enemy to the sword, square cutting the Aussies to the boundaries in a manner that brings a tear to the eye of any son of Albion. I will pass quickly over Saint Kevin's birth place; but since England's patron saint, St George, hails from foreign climes why should anyone quibble.

Watching our batmen putting the Aussie bowlers to the sword brought to mind that magical Test at Headingley in July 1981. With England following on, the bookies were quoting 500 to 1 odds on an English win - shows how patriotic we English are! When Saint Ian strode to the crease to face the forces of darkness England were 107 for 5; and it looked like the game was up. Not a bit of it. Ably  supported by the tail he carried his bat at 149. One man had grabbed the game by the scruff of its neck. He inspired the rest of the England side and Saint Bob Willis took 8 wickets for 43 and England won by just 18 runs.


Oh, that blissful summer: when England's youth exposed the underbelly of the fearsome foe. "Beefy" went on to win the next Test at Edgbaston, scything through the young bloods of  the convict colony with 5 wickets for 1 run. And then at Old Trafford hitting Graeme Lilley out of the ground on three occasions in an innings of 118. England went on to win that Test and the Series and the Ashes. To be young(ish then) was very heaven.

From the sublime to the ridiculous. The draw on Thursday reminded one of England's woeful performances at the Eurovision song contest. Losing the bid for the World Cup was about as significant as Anne Widdecombe going out of "Strictly"

As more than one sage has observed; England should focus on winning, rather than hosting, the World Cup. A glance down under might be instructive here.

Anonymous said…
Haha, so I guess you are in favour of one organised sport...

I find the way people experience a kind of religious transportation / shattering grief at their team's wins and losses really absurd. I like sports, but it's no source of fealty and meaning.