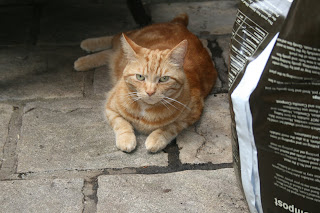 What a difference a few hours can make. Little did we realise that this morning when Ginja the Ninja turned tail half way up the stairs on his way to his accustomed station on our bed that things had gone so badly wrong.

We thought something was awry. Having skedaddled out of the house he was nowhere to be seen. Not in a pot in the garden dreaming of mice and men. Not on the kitchen extension watching collared doves suspended above the bird feeder and thinking "I can 'ave 'em if I put my mind to it." Not on his chair dozing contentedly dreaming of fresh chicken and duck jelly. He was nowhere to be seen.

We searched high and low. If you are a cat lover you will understand the gut wrenching fear that something untoward has happened to "the special one". Trapped in some shed, caught in a fence, poisoned, kidnapped or sold on the Black Market to some unscrupulous cat lover in a James Bond film.

And then I saw him; on our neighbour's roof. It's him in the last blog;  He looked as if he was sleeping the sleep of the innocent. How wrong could I be!! Little did I know what tragedy had befallen Ginja the Ninja - terror of the alleys and by-ways of Milton Road.

He had been bested. There's no other way of saying it. No matter how painful it is to admit it he has met his match. "The Matchless" has been struck down.

A while later I saw him on his bed, unable to lick his wounds, he looked so pitiful. Both ears snagged and a blooded head our hero was bowed. Those yellow/green eyes so often taunting and  challenging were now dimmed as he offered his chin for a reassuring stroke.

He hasn't eaten, turning his back on favoured foods he positively avoids our sweet nothings and gentle cooing. He is hurt and hurt bad. We can do nothing but watch and fret.

"He is just a cat" we hear you say. And so he is. The bestest cat in the road - or so he told us and we had reports from far and wide of his exploits. But now he lies on his bed his head cupped in his paws, unable to face the world and his fall from grace. And we are totally bereft.

What monster can it be that has stunned our hero, what alien force could have sent him packing, ears torn and tail between his legs. We have scanned the horizon but to no avail. We have asked our neighbours - "Have you been disturbed by dark shadows or deep growlings?"

Nothing. And on this Ginja is mute. So we wait and ply him with delicacies and hum strange tunes in the hope that he will recover.

What's  that? In the corner of the garden a cat is shadow boxing. His head is bandaged and his gait is unsteady but the silhouette is clear. Young Ginja is practising, preparing himself for the return bout.

We've nailed down everything that we can: just in case.
Email Post