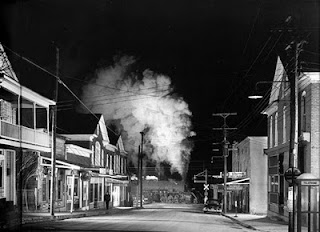 I've been a regular readers of Wibbo's blog "Hove Daily Photo" for a few months now. She kindly went and photographed the house, in Hove, I used to live in some 40 odd years ago. Her record of the town is full of reminiscences for me and reminds me how lovely many parts of it are. I especially like the grand Victorian and Edwardian  mansions that run up from the sea front. Such grandeur, such confidence! In some cases too much of the latter resulting in overwrought edifices which put one in mind of the Munster's house, or the house behind Bates Motel. Even so I admire the gusto with which the grandees of the borough went about their house building.

The other thing I like about Wibbo's blog is that most of the photograph show a well cared for public space. It's tidy, clean and welcoming. I recall in the '80's one of the (many) criticisms of Mrs Thatcher was that her avowedly market approach led to "private affluence, public squalor". The phrase was coined by J K Galbraith reflecting his observation that privately owned resources were generally clean and well maintained while public spaces were often dirty, overcrowded, and unsafe.

This contrasted to the Victorian virtue of civic pride which was manifest in the beautiful municipal buildings (schools, public baths and town halls) along with the many parks that were created. Of course, many of the populous had to use the beautiful public baths because their private conditions were so bad. Victorian grandeur was built on the grime and poverty of the millions of workers who slaved away to make the Empire great!

In the 80's the perceived emphasis of the Thatcher government was to increase the economic well being of the individual. De-regulation of the financial markets "Big Bang", the privatisation programme - which was more about getting in income for the government rather than "shareholder democracy"- all to increase private affluence. On the other hand, Thatcher was seen to have an inbuilt distaste for anything in the public sector which was seen as wasteful, inefficient and self serving.

During the 80's civic spaces appeared to get dirtier, unkempt and in many cases abandoned.

Many blamed Thatcher and her successor Tory Governments.Withdrawing monies from local government and reducing the powers of unions led to soft services being withdrawn or cut back. Public spaces, so the argument goes were left unattended. Park keepers no longer kept a beady eye on the flower beds and swings: street cleaners were seen once a month, if at all. Public conveniences were closed and those that remained open were left unattended to be vandalised.  Street lighting was neglected and our streets became less safe. This contrasted with the houses on the streets which were rapidly becoming filled with consumer goods of a bewildering variety and increasingly protected with bars, alarms and noisy, vicious dogs.

Thatcher may have been able to transform much of our country but she wasn't responsible for all that.

More cars meant fewer people walking on the street - fewer eyes to report suspicious activity before it became a crime.

Affluence meant kids moving away from home and setting up on their own; better health meant surviving partners living longer on their own, with families no longer around the corner.

And I suspect people at the time did believe that their councils didn't provide value for money and the less spent on grand municipal schemes  the better.

Later, one of the ways of trying to enliven, to regenerate those old public spaces was to turn them into retail magnets - filled end to end with shops, cafes and wine bars. What we have now is a country filled with carbon copy town centres which, to my eyes at least, are as desolate and desperate as  the spaces they tried to replace.

The home of Oliver Crowell, Huntingdon, is a case in point. It has been ruined by two attempts at regeneration. A 1960 -70's town centre as been partly abandoned to charity shops, with a faceless 1990's pastiche tacked on. Bury-St-Edmonds has done less well. The beautiful church and grounds are in stark contrast to the drab, retail area full of the usual high street suspects. Both towns suffer from relatively high unemployment and low economic activity but that shouldn't mean a lack of imagination or will in civil design.

And so to Walthamstow, where our council exhorts us to  "Love Your Borough". A bloody cheek, many of us love the place and dispair at the Council's failure to understand its nature and instead seek to turn it into another dead retail space.

Thatcher has a lot to answer for: but not for the continuing failure of local government to serve its citizens.