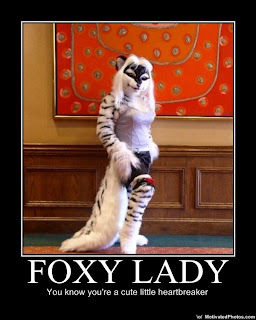 What won't we demonise?

I'm currently using Firefox, which displays a pretty picture of a fox. In the 1970's Basil Brush was a superstar and currently there's an extremely irritating ad about on line bingo called FoxyBingo. I've viewed zillions of blogs with fabulous photographs of foxes and the BBC's popular "Spring Watch" and "Autumn Watch" programmes regularly feature foxes. Currently featured is the Purbeck Red Foxes and a while back there was a series of films about urban foxes in, I think, Glasgow.

Now, they are "vermin", a menace to civilisation. No law abiding family is safe from the rapacious appetites of these creatures. And why?

In what is an extremely rare, I repeat, an extremely rare occurrence two very small babies were bitten by a fox which managed to get into their upstairs bed- room. It must have been a terrible experience for the parents; the injuries could have been life threatening. But it does not warrant the witch hunt we're seeing in our press.

According to the Mayor of London foxes are pests and "Therefore it's right that boroughs should focus on their duties for pest control because as romantic and cuddly as a fox is, it is also a pest." I think he's just fired the starting pistol of  the race to see who can bag the most number of these beautiful creatures.

Who's the villian here? our bins are overfull with food and the fox, a resourceful and cunning critter, raids them at night. Where we live we have a problem with fly tipping. Some of us humans leave their refuse in the street - why I don't know - and the foxes rip open the bags spreading chicken bones, half eaten kababs all over the street. It's the foxes who are blamed for the resulting mess.

My neighbour complained that foxes were active outside his house - he couldn't sleep. It was pointed out that everyday an old lady dropped food for the pigeons near his house. Clever foxes had a ready meal. Who's to blame?

More children, babies and adult are mauled by pet dogs. I don't hear Boris Johnson calling for a cull of all dogs. Your domestic moggy is more viciously equipped than a fox.

I recommend that you (and all news editors) read  "Living With Urban Foxes" produced by the Chartered Institute of Environmental Health. This was written when there wasn't a fire storm of sensationalism.

The fox "attack" took place in Homerton,  East London. Homerton abuts onto the Hackney Marshes, the Lea Valley Park,  Walthamstow Marshes ( and the Olympic site). This is a huge area of open parkland and nature reserves. Just where you'd expect foxes to hang out, along with lots of other inconvenient wild life. Maybe Boris will sponsor fox hunting across the Marshes or include it as an Olympic sport?

We have foxes on our allotment. They kill the rats and pigeons that our activity, growing vegetables etc attract.They are unassuming, beautiful companions who watch us from a distance and they leave us alone. Why can't we reciprocate.

Finally, Sir Martin Rees in one of his recent BBC's Reith lectures pointed out that the current rate of species extinction is 100 to 1000 greater now than in the past. Is it any surprise given the sheer intolerance and ignorance we have for those sentient creatures that share this world?
Email Post
Labels: Basil Brush Boris Johnson foxes Hackney Marshes Homerton

The Sagittarian said…
Poor foxes, we don't have those here tho'. You might recall many years ago in Australia a couple had their baby snatched by a dingo and there was a resulting witch hunt (er...dingo hunt?) and the mother spent years in prison accused of killing her own child. I take it that this suggestion hasn't been made in this case of yours.
9 June 2010 at 03:23

Marginalia said…
Not at all. I've since discovered that the incident took place in Lauriston Road, Hackney. It's a wide road with large Victorian houses. There's a lovely church with a churchyard, a large open space "Millfields and a large park Victoria park, only a foxtrot away.
9 June 2010 at 08:53

Anonymous said…
Remember, Boris Johnson has been calling for some time for a repeal of the hunting act. The more he can villify foxes, the more support he'll expect to get for his appalling concept of a sport. The hunts have been breeding foxes accross this country for years by way of artificial earths. Now of course they are pretending to be pest controllers. They want us to believe they are 'managing' wildlife by taking out only the sick and the old - which is why they had to change the name 'cubbing season' to 'autumn hunting'. Terrifying and killing old and sick animals isn't enough for these thugs. They like to use the young cubs as bait in training the young hounds. As for the fox attack, you will generally find there is a family dog that no one wants to put down that will be carted off to a relative until all of this dies down. Sadly by the time the truth surfaces, the media is no longer interested. Could have been a freak occurance but most experts doubt it.
9 June 2010 at 22:40

David J said…
I completely agree with you on this one. It's an incredibly rare incident, given the prevalence of foxes in the urban environment. Foxes are not 'vermin' in the city to my mind.