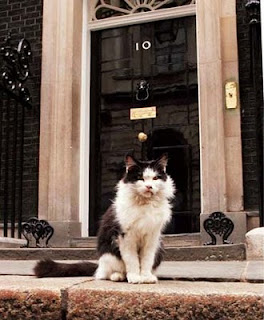 I've managed to secrete myself under the table in the war room at Admiralty House in Whitehall and am able to report verbatim the epoch making talks between David Cameron (leader of the Conservative Party and Prime Minister in waiting) and Nick Clegg ( King Maker and husband to a  smouldering Spanish señora).

Let's switch on the mike and listen in:

"Commiserates old boy - gave you a right thwacking on the jolly old playing fields. Caught you a right nasty up and under; what!

"You're a damnable ski and bounder of the first water; Cammy. You were lucky not to be tanned by us. Bloody silly voting system that's what. Our muzz was shafted by  that Antipodean John of yours and his pack of hyenas. Any way let's talk  turkey."

"Now look here Peggotty, we gave you a frightful titching on Thursday night. I'm God in this Library and if you want to join the Sixth Form Select, you'll have to play by my rules. Got it! Just so you know; we ain't changing the voting system. If you don't like it you can slither off to Bad Egg Brown, but I don't rate your chances."

"Cripes! that's blown it. My Remove will give me a good slappy if I can't get a show up on  this. Bye the Bye, I hear that you're not exactly Little Lord Ashy's flavour of the month. He reckons a newbie could have made a better show with all the lucre he's splashed out. What about a few extra pounds for the plebs - raising the tax threshold; that sort of jape. Our bod with the numbers, Sweet Gene Vincent says it won't break the bank."

"Sam and I have been wondering how we might brighten up the dorm at No 10. Bound to be as dull as ditch water with  that dour Preb vicar ensconced there for the past three years.  I thought we'd let the Peter Jones people have a bash - nothing too fancy. A hint of class to show who's Head Beak. As prospective junior in the common room, I thought you might like a say."

"I'm not your bloody fag, you snotty nosed tug. If that's the way you want to play it; that's it fini, I'm out of here and taking the high road to Kirkcaldy and Cowdenbeath   "

Golly Gosh, you heard it first on "As I was saying to my friend the other day" (reminder: shorten the bloody title). Clegg spurns Cameron. Is there a marriage in the offing, via Gretna Green? Hold on, someone's coming through the door.


"David, it's just not fair. Since Friday I've been holed up in my digs not able to talk to the press or anyone. Now, that bloody Vince Cable has phoned to ask what I thought of our stance on the Euro crisis. It's the first I've heard of it. This isn't right, I'm Chancellor in waiting!"

"Nick, before you dash off. How would Vince feel about skipping the light fandango across the threshold of No11?"
Email Post
Labels: Cable cameron clegg public school slang Whitehall