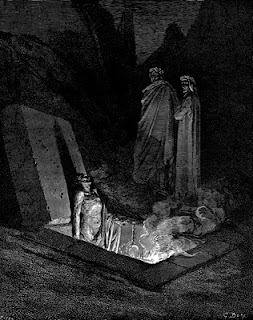 Had Dante been around to see the results of this recent election he may well have added an additional Circle to Hell. The Circle of the Hung Politicians.

What exquisite torture has resulted from this election's outcome. The electorate's revenge on the political classes could not be sweeter.

A analysis of Thursday's results highlights the parties discomfiture:

The Tories are 19 short of an overall majority. They have the largest number of seats and the largest number of votes.They could form a minority Government and, like the SNP in the Scottish Assembly, govern on a vote by vote basis. However, that would create such uncertainty in the money markets that the risk would be of a Greek like tragedy being visited on our shores in no time. They could seek to sign up the "Others", but that would be pretty unstable, with the same problems. An alliance or arrangement with the Lib Dems would give them a working majority; however, in terms of numbers only, they'd need the sign up some of the "Others" besides the Ulster Unionists to give them some wriggle room.

But there are real difficulties with trying to tie up with the Lib Dems. Besides a considerable difference in political outlook, there is the question of political reform which has to be Clegg's main demand. The Tories cannot agree to a change in the voting system which is likely to reduce their future chances of gaining power.
Even so the Tories are unlikely to give much in the way of concessions to the Lib Dems other principles. Those who voted and worked to get the Tories elected will not be too pleased if their manifesto commitments are watered down by a party with a sixth of its seats.

For Nick Clegg, "The Hollies" song "King Midas in Reverse" seems appropriate. The journalistic epithet   "King Maker" looks more and more  a curse. On the one hand Labour would entice him with the promise of an early referendum on major electoral changes; yet the price would be supporting the party that lost the election. How perverse would that appear to voters. He'd also have to sup with the devil Brown. But that on its own wouldn't produce a working majority - combined Clegg and Brown would have less seats that Cameron. So he'd have to go in with any of the rag tag parties they could sign up. Hence Labour's fevered talks with the SNP and no doubt PC.

All leaders talk about acting in the national interest. Under the cloak of "national interest", our leaders can sell their souls for political power. For Clegg, this might give him in a "Get Out Of Jail" card. There are, however, some big "ifs". If he can pursuade the Tories to give more concessions on taxes and the deficit, and if he can convince his party that being a partner in a successful coalition would reap greater future electoral success; then he might be able to get away with giving up his main electoral change demand - in the national interest.

He could, of course, go it alone. Have nothing to do with any of the parties and when it came to votes in Parliament, vote on "the issues". The trouble is his party would be a loose cannon - likely to sink the ship of state at any time. Not something the electorate, and more importantly, in the short term, the markets would be happy with.

That leaves Labour and Brown. Is he in the most uncomfortable position of all three? I'm not sure. Certainly, he's like the condemned man waiting for the trap door to open. He's a hostage to fortune. Would he be sacrificed by Labour to secure an agreement with Clegg? A news item today, reporting that Brown had phoned Clegg to discuss a possible deal, said that it ended in a shouting match. That, of course, might be mischief making by some blogger or tweeter. Even if they did do a deal, there surely would be a real fear that they could fall out at any time and that would be it. Not something the markets would anticipate with much relish.

For the moment at least Brown can enjoy the obvious frustration of Clegg and Cameron in  their attempts to find a way through. But in the end he's doomed.

If not it'll be the most spectacular resurrection for 2000 odd years and the biggest political swindle of the age.
Email Post
Labels: brown clegg Dante election Greeks Hell lib dems SNP

Pie Man 70 said…
Yup, basically as an electorate we decided "We're sick of you just ramming things through on a majority, go and work together like grown ups"

Think teh Lib-Dems will opt for a long game, as they have to prove coalitions work or else when a referendum comes around for PR the anti-campaign will just point to this era. Some are even saying the Tories would prefer this to fail so they can run the next campaign under a "We told you so" The old curse is true, may we live in interesting times
10 May 2010 at 11:19

Marginalia said…
I'm afraid my analysis is clouded by my visceral hatred of Brown. I worked in the Treasury and witnessed him and his advisers at first hand. It bred nothing but distaste in me.
10 May 2010 at 12:52