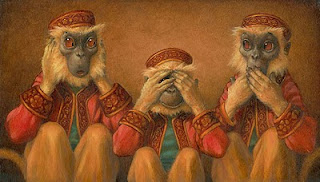 Well it's happened: the great televisual event of the last 50 years - if you believe what the media says. The Brown/Cameron/Clegg television debate. I, like zillions of other bloggers, will offer you dear reader my views on the spectacle.

I frankly found Clegg extremely irritating. Now I know most commentators say that he won, if not hands down, quite comfortably. But, I'm afraid, I wasn't convinced. OK he was good in using examples to emphasis a general point about prison, the health service and social services: but I thought Cameron did just as well. And his holier than thou stance; and his attempt to stand apart from the other two got up my nose.

Cameron, I found irritating, not as irritating as Clegg, but still annoying. I'm not convinced that his big plan on savings or efficiencies is honest. It's a big ask to save £6 billion in a year, much of which is to come from cutting bureaucracy, ending wasteful spending. It's not been achieved before. I wasn't very keen on his views on prisons, or crime and the police: although his story about a police force buying a £70,000 Lexus hit the right chords.Overall I thought he came over rather light weight.

Brown, in comparison to the others, looked age weary. But when he smiled I thought I glimpsed more of the man. He has a strong case in arguing that the best way to reduce the deficit is to grow the economy and that cutting public spending, when the private investment remains weak, is a risky strategy. I thought he scored by repeatedly contrasting his approach to that of Cameron's.However, I remember the Nixon/Kennedy debates - and Brown on occasions look frighteningly like "Tricky Dickie"

This was the first of three debates. For Clegg it gave him an audience he wouldn't have otherwise; and he did well. I suspect the weight of expectation was too much on Cameron's shoulders and that might explain a rather lacklustre performance. Although, the "exit" polls suggested that Brown came third in people's opinion; I suspect part of that reflects the built in bias against the man. In the next two debates, Clegg will not be able to get away with lofty generalisations and sentiments. I suspect Cameron will have been glad just to have got through this without any major gaffs; and if he relaxes will do much better. Brown? I'm not sure. If the softer side, which I believe I glimpsed, comes through and he resists long lists and statistics then I'm sure people may warm to him.

Has my viewing this first debate affected my voting intentions? Nope, they were very vague before the debate and still are.  I suspect I'll vote for who I feel is more likely to deliver less government and less central direction. So Brown has a massive job to win my vote. The other two can so easily lose it.
Email Post
Labels: brown cameron clegg conservative labour lib dems