Stop me if you think you've heard this one before 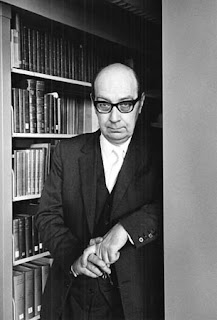 Last week I went with a mate to the theatre. He’d seen excellent reviews of a revival of Harold Pinter’s “The Caretaker” with Jonathan Pryce. The play centres around two brothers, Mike and his older brother Aston and Davies the tramp who’s living in their run down house in West London.

I’m not a great theatre goer: usually finding the plays too long, the seats too uncomfortable and the theatre too hot. Not a regular, I'm shocked at the prices charged. This time it was £45: but it was a famous play – the one that launched Pinter’s arc of brilliance, ending with a Nobel Prize and the daughter of Lord Longford, Lady Antonia Fraser, as his wife.

The theatre, the Trafalgar Studios, was in a previous life the home of the Whitehall Farces which ran in the 50’s and 60s. The sort of harmless, light entertainment that Pinter and others (including Arnold Wesker, John Osborne and Alan Sillitoe) brusquely pushed aside. The theatre today is split into two auditoria and on this occasion the steeply raked and cosy space was full to bursting. Luckily it was neither cramped nor too hot, with an audience that was young, middling and old. A bit like a Roxy Music concert. My mate was seeing the play for the second time: the first time was in 1960 when he went with his father. I imagine that many of the audience were in a similar position.

The only other Pinter play I think I saw was a TV version of “The Birthday Party”. I remember little of it other than it was in black and white and there was a very buxom (at the time I was 16 or 17 I suppose) female character who stood with her legs wide open. That’s the depth of my appreciation of the drama of Pinter.

In the morning of the play I heard a biography of the theatre critic and “l’enfant terrible” – Kenneth Tynan.

It was his review of “The Caretaker” in 1960 that launched Pinter, after he’d ravaged “The Birthday Party” two years earlier. Tynan was a towering figure in the world of theatre, feared and loved in equal measure for his witty, intelligent criticism. But to the general public of my generation at least he is remembered for two things.

In November 1965 he appeared on the BBC’s satirical programme “BBC3” and memorably made the first utterance on air of the word “fuck”. Public sensibility was shocked; Mary Whitehouse, the self appointed guardian of the nation’s morals, went ballistic and wrote to the Queen suggesting that Tynan’s “bottom should be spanked”. She was unaware of the irony of that comment – Tynan being a sadomasochist. Private Eye wittily commented that Tynan’s stammer made it the first 13 syllable 4 letter word.

He wrote “Oh Calcutta” which went on to be the longest running revue in Broadway’s history. Now its mixture of bawdy sex and nudity would  pass unremarked but 40 years ago it caused a storm. The list of contributors to its sketches included John Lennon, Edna O’Brian and Samuel Beckett, but ironically it was a critical failure, despite being a popular success. I never saw it – my experience of stage nudity was in “Hair” in 1970; which is now to be revived in the West End. I can’t be the only person to think at 40 odd years old it should be re-titled “Bald.”


The Sixties were drenched in sex. Philip Larkin summed it up perfectly “Sexual intercourse began in 1963 (which was rather late for me) -- Between the end of the Chatterley ban and the Beatles first LP.” And talking of the four letter word, for many, the first line of one of Larkin’s poems “They fuck you up your mum and dad.” is the extent of their knowledge of his work.

The play? I thought it was very good. There’s some sparkling dialogue with hugely comic touches, but Pinter never lets you get your bearings. Who’s the least sane of the three, Davies the tramp, the mentally slow Aston or his cocky, sadistic brother Mike? It’s all unfulfilled ambitions and fantasies. Davies is going to go to Sidcup where all his records are kept. Once he has them people will know who he is and treat him with respect. Aston is going to build a shed and once he’s done that he can sort out the derelict house his brother owns. Mike’s role is to persecute and confuse Davies with unrealistic dreams and ambitions, to draw him in and then smash his delusions. And at the end of the play poor Davies is left floundering reduced to a plaintive stammering.