A Horse with No Name 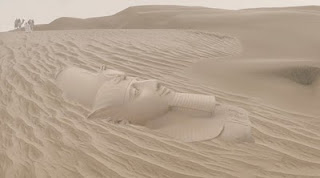 I shouldn’t let it get to me but it does. Our Council’s lamentable performance in collecting our recyclables. It’s not that massive an issue. OK, they’ve changed the days and times without bothering to tell us and they didn’t collect ours last week. This means we have a load of ugly, disfiguring containers awaiting collection.

I e-mail the Council last week after they’d missed the collection date. They e-mailed back that they were aware of the problem but because of “access problems” they had not been able to do their usual collection but would try to clear it later in the week. Later in the week, talking to fellow residents I learnt that the rest of the road had been done. We mysteriously had been left untouched.

This has really got to me. My nascent paranoia sprung fully armed out of my head. Why leave us and what were the “access problems” that meant they couldn’t take away our recyclables last week. All sorts of ideas troubled my thoughts. We have an iron gate which we keep closed – was it that? Over the gate we have a lovely, if large, pyracanta. Was the refuse operative too tall to get under it or were we breaching some health and safety legislation pertaining to bin men and spiky evergreen bushes? Was the bin man scared off by the large blackbird that spends a considerable part of each morning eating the berries on the bush? Who knows?

And today is refuse day and no show. I checked the Council website and went To “My Place” where the Council kindly tell us where we live, how much our Council Tax is (as if we don’t know), you know the sort of thing, along with our recyclable collection day. Sure enough in bold script it confidently proclaimed that Monday’s the day they collect our thrown out tins, bottles, plastic etc, etc.

Maybe they’ve collected everyone else’s but not ours because of those mysterious “access problems”. But no, having paraded up and down the street I was confident that they hadn’t shown at all. Our neighbours all had filled ugly black plastic boxes in their front gardens. So we await the morning with fear and anticipation!

I shouldn’t let it get to me. The guys who do the job usually clear our boxes at around 7 am, and I don’t think our road is the first. They go out in all weathers and don’t earn a fortune. I’m glad they do it not me. It’s an important job; and when it’s not done it’s sorely missed. Unlike my job – where I spent my time pushing paper, writing to my opposite number in the Treasury or the Cabinet Office, arguing over the niceties of phrasing in a “policy document”. I could have been swept up with the garbage and no one would have noticed any difference.

Young P B Shelley has something to say about the mighty and proud who claim they make a difference:

I met a traveller from an antique land
Who said: "Two vast and trunkless legs of stone
Stand in the desert. Near them on the sand,
Half sunk, a shattered visage lies, whose frown
And wrinkled lip and sneer of cold command
Tell that its sculptor well those passions read
Which yet survive, stamped on these lifeless things,
The hand that mocked them and the heart that fed.
And on the pedestal these words appear:
`My name is Ozymandias, King of Kings:
Look on my works, ye mighty, and despair!'
Nothing beside remains. Round the decay
Of that colossal wreck, boundless and bare,
The lone and level sands stretch far away".

Layclerk said…
Rather unexpectedly my local council notified us all a few days ago that they're about to issue us for the first time ever with a recycling box to be used for kerbside collections!

There's a recycling depot within 200 yards of my house, yet it's embarrassing to admit that I haven't been recycling as much as I should have been.

In a previous house, my former marital home if you must know, in a different council area, we had boxes and bins for all sorts of different recyclables which were collected regularly, but since moving here and being forced to actually load up the car and deliver the stuff to the depot, my "save the world" resolve has slipped somewhat!
16 February 2010 at 22:28

Marginalia said…
We were relieved yesterday! The bin men arrived clearing away the mass of tins etc. ( our recycling ismostly tins of dog food because we feed three foxes in our garden).

My wife had the temerity to ask whether Tuesday was the new Monday collection day; just so we knew where we stood. She received a shrug of the shoulders from the bin man.