Let the Sun shine in 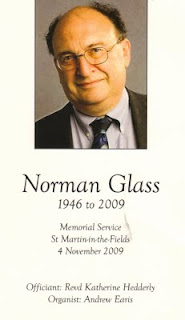 On Wednesday 4th November a memorial service for Norman Glass was held at St Martin’s in the Fields in Central London.
The occasion was respectful, sorrowful and celebratory in equal measure; but for all the reminiscences, the testimonies and fine words; it missed summing up Norman. But then it was never easy to sum up the man in a few “bon mots” or telling observations.

The last time I saw Norman was three years ago, at the reunion of a Treasury team that had worked together in the first year of the Labour Government. Norman had left the Treasury and was Director of the National Centre for Social Research (NatCen); he was still its director when he died in June this year.

We were sitting outside the Westminster Arms when Norman strolled up. As usual he wore his hat , an open neck shirt and looked rather like a cross between a mad scientist and Jewish haberdasher. Asked how work was going he said not bad and went on to explain how it had just got even better.

Except he seemed to have forgotten about it. On his sixtieth birthday Norman was at his desk when his wife phoned in rather an excited state. She had gone to the cash machine and on checking the balance found it to be substantially larger than she expected it to be. “Oh that must be my pension lump sum”, explained Norman. He didn’t repeat his wife’s reply.

I worked with Norman during the 1995 public expenditure round. We had just lost our team leader to the Cabinet Office and Norman was asked to take us under his wing. He was, at the time, deputy director of public services and chief micro-economist at the Treasury, so it wasn’t that he wasn’t busy.

Right from the start Norman had the measure of us. I like to think he saw that we were capable of doing a great deal more than we believed to be possible. By encouraging, cajoling and frightening us we found ourselves working, hard and enjoyably; helped on by numerous bottles of wine which we shared with Norman and others. In fact, we suspected that many of the visits to discuss tactics, drafting niceties or meetings were excuses to sample the hand picked French wines which could be found on the top of our cabinets.

Norman could be serious, as when he sat us down ahead of an important Ministerial briefing meeting and made it clear what he expected from us and the standard required, but not for long. He couldn’t resist pulling your leg. As an Irish Jew he found it impossible not to tease my work colleague who was a Protestant Ulsterman. Nor when he was on a visit to Northern Ireland could he resist cracking a few Irish Catholic jokes in the company of senior Northern Irish civil servants.

And he was no slough. Once I was attending a meeting in his office and seven or eight of us were around the conference table and he was at his desk. One moment he'd be talking on the phone to colleagues and the next conducting the meeting with us as well as passing round the teas and coffee and getting his secretary to arrange trips and meeting for the next week. All carried off with aplomb and good humour.

At the memorial we learnt how intelligent, clever and dynamic he was. A renaissance man, well read, knowledgeable about so much. A man with great vision. The music played reflected that. I kept thinking “I know he was bright, I know he was dynamic; what about his humour, his joshing and sly winks – why can’t that be captured?” It was only when the last speaker, a retired Treasury mandarin, reminisced about his working relationship with Norman did we see a reflection of that part of the man. It was quite appropriate, for the retired mandarin was in his way as un civil service like as Norman. And after the service the crypt of St Martin’s rang with laughter as we shared our own memories of a lovely man.
Email Post