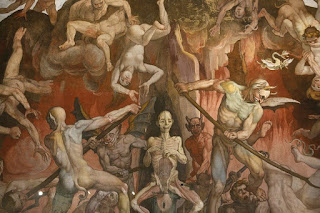 Here, in England we’ve been suffering from the Deluge. After the Great Snow, the Great Downpour. And, as if to restore some equilibrium to our planet, parts of Australia are ablaze. Ominously fire has consumed the Beijing hotel complex; one of the “iconic” buildings designed and built for the 2008 Olympics.

Is this an omen, a sign, a warning of what is to happen to our Olympian dreams? Are they doomed to be incinerated on a bonfire of vanities?

It’s difficult to get any real perspective on the UK’s Olympic dream. The timing is dire. Official sponsors, instead of subsidising the Olympic build, appear to be queuing up for subsidies from the Government to prevent them from going under. The hope is that by 2012 the economy will be back on track; except “on track”, doesn’t mean the growth we’ve experienced from 1993 until late 2007. Frankly, I don’t know what risk analysis the Government did when they bid for the Games – but I’m sure they didn’t, in their wildest dreams, expect GB Inc to belly flop so dramatically. So I suppose we have to cross our fingers and hope the Blitz spirit will see us through and the Games will be a success despite our masters’ miscalculations.

However, I think we can forget about the Olympic legacy. The danger is the only one we’ll be left with is a benighted site, debt and no businesses to fill the vacuum left once the world leaves via our creaking transport infrastructure.

Waltham Forest is supposed to be a beneficiary of the pre and post Olympic legacy. I’m sorry but I see very little evidence of anything approaching a hand out coming our way let alone a legacy. I’m too embarrassed to look at the borough’s 2012 website. The main narrative seems to be "we’ll be just a stone’s throw from some of the Olympic sites – isn't that great!" but there’s precious little which is concrete of benefit to the borough. I know it’s all still 3 years off and as the momentum builds we may well see much more happening… but the risk is that, because of the economic down turn, many of the businesses that might have benefited from the development of the Games will no longer be around.

The EMD cinema is once again in the news. I don’t want to say much about the latest machinations, but it seems to me that the Council has got itself in a hole. It has to do something about the cinema, but its leverage is limited. It can’t afford to buy the site –either financially or politically and it is dependent on the owners, The Universal Church of the Kingdom of God, to get them out of their hole. Their proposal which appears to relegate a cinema to a B feature movie satisfies no one, but the Church, although ominously the Council appears to be grasping it with both hands. It is not the restoration of a cinema. It is the development of a successful, populous, dear I say alien, church, in an area which has significant Muslim and Hindu populations. Where residents’ street parking is an incendiary issue and where the Council’s failure to regenerate the town centre is manifest, the idea that a new church, not necessarily serving the local population, could be given the go ahead yet a major redevelopment is dead in the water is likely to be highly inflammatory.

It just goes to show how empty of ideas, policies and actions are our elected representatives. One solution might be the “Auto de Fe”, where our councillors do penance for their sins and transgressions as they are paraded round the borough. Come to think of it that might just spark a creative flame in their moribund minds.
Email Post